Bird of the Week: Can the Eagle’s revival be repeated? 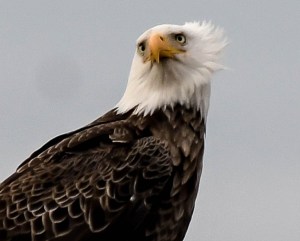 This elegant old Bald Eagle took up a perch near us at the Blackwater refuge and offered his impressive profile from every angle. A delightful encounter.

This is a good week to celebrate the Bald Eagle, which carries a lot of symbolism as it hovers overhead. This Eagle (to the right) was one of a half dozen we spotted last week at Maryland Eastern Shore’s Blackwater National Wildlife Refuge. He’s part of birding’s greatest revival of this generation.

A half century ago, the Bald Eagle nearly went extinct as a result of widespread use of the insecticide DDT that poisoned fish  — a major food source for Eagles and raptors. Only about 500 pairs remained in the U.S. when the insecticide was banned in 1972, and federal laws protecting the Eagle went into place.

Slowly, steadily, Eagles made a comeback until today they’re almost as plentiful as Robins in much of the country. Over the course of a year Eagles spend at least some time in every state. Wildlife researchers estimate there are 10,000 pairs across the nation. In 2007, they were removed from the threatened and endangered species list.

The Bald Eagle was back. 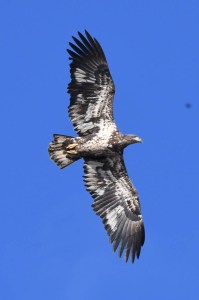 This is a juvenile Eagle who is still three or four years from gaining the mature dark feathers and strikingly white head.

And yet fresh troubles for birds have made headlines in recent weeks. The administration last week backed away from special protection for the Sage Grouse, whose habitat in Western states puts this striking, chicken-like bird in conflict with oil drilling plans. At the same time, news of the rising levels of carbons in the atmosphere and accelerating loss of polar ice arrived with the holidays. The future of the environment cannot help but be on our minds.

The Bald Eagle is a versatile bird, better able than many to adjust to new habitat, shift with the climate and find food even if it has to scavenge for meals. It’s  an inspiring sight, with a wingspan of up to seven feet and a regal appearance that takes a full five years for juveniles to achieve.

What would our world be like if the Bald Eagle had faded away?

The juvenile Bald Eagle from another angle.

The national bird is plentiful today only because we took special steps to protect it. The Eagle has a stature and appeal that doesn’t extend to many birds, including, for instance, the Sage Grouse. But what helps one species will protect others. This is a good week to think about what kinds of efforts would keep the Eagle and its fellow birds soaring overhead. 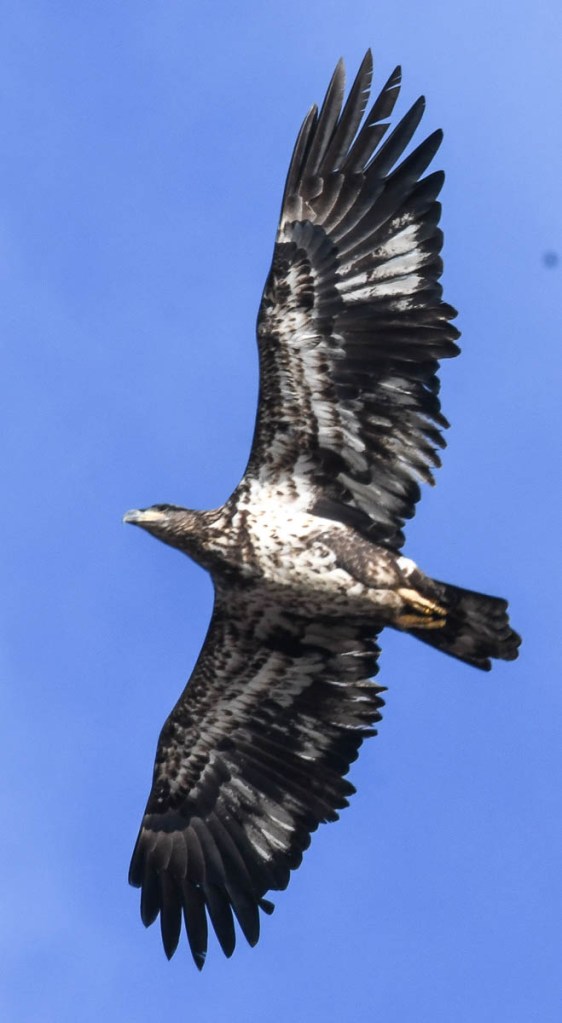 This is a juvenile Eagle who was hunting at the Blackwater National Wildlife Refuge. 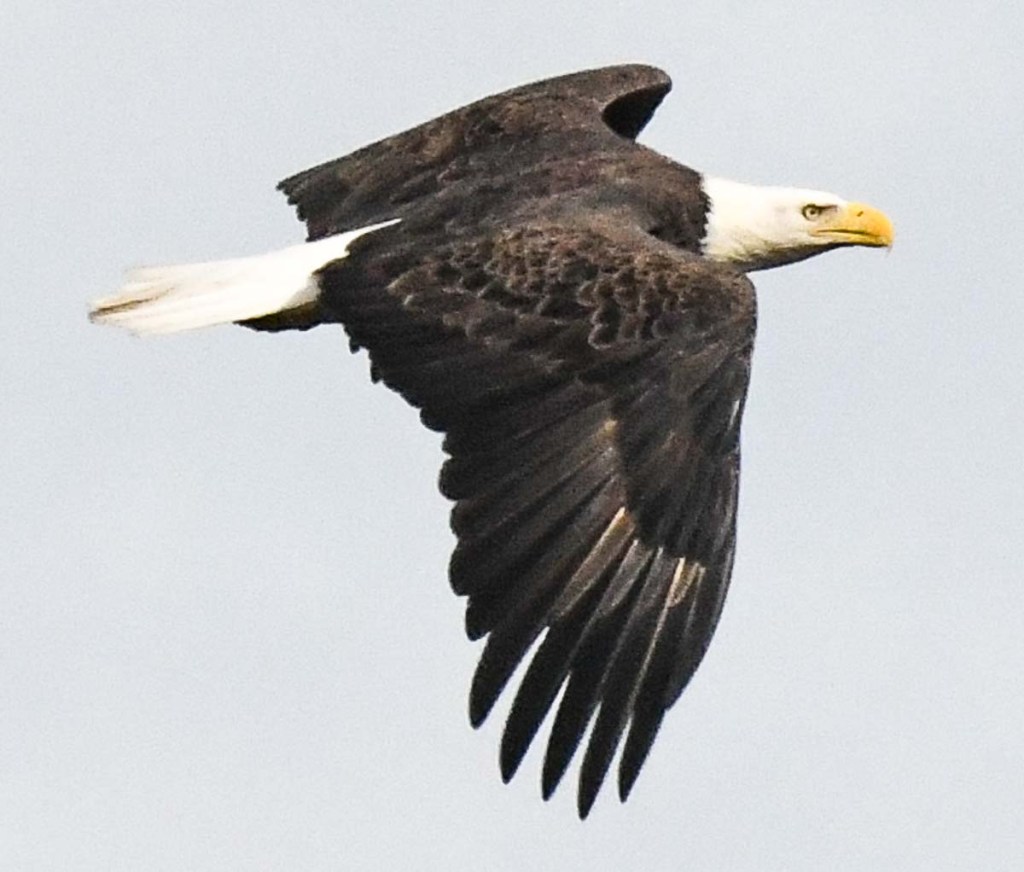 The mature Eagle was spotted at Maryland's Conowingo Dam on Susquehanna River, one of the East's best spots for watching Eagles at work.

This is a side view of the juvenile Eagle at the Blackwater preserve. 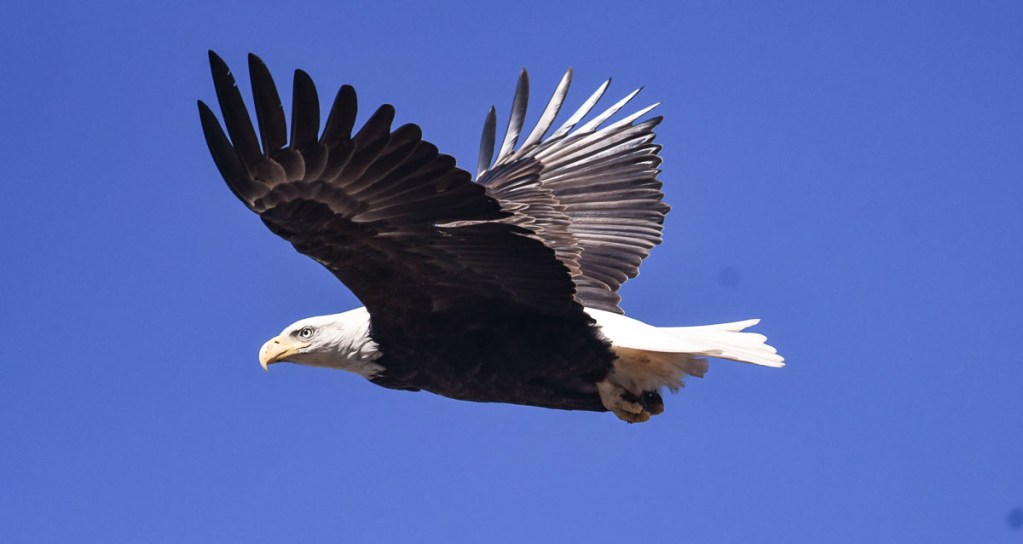 This aging Eagle was surveying the coastline of North Carolina's Outer Banks near the National Seashore. 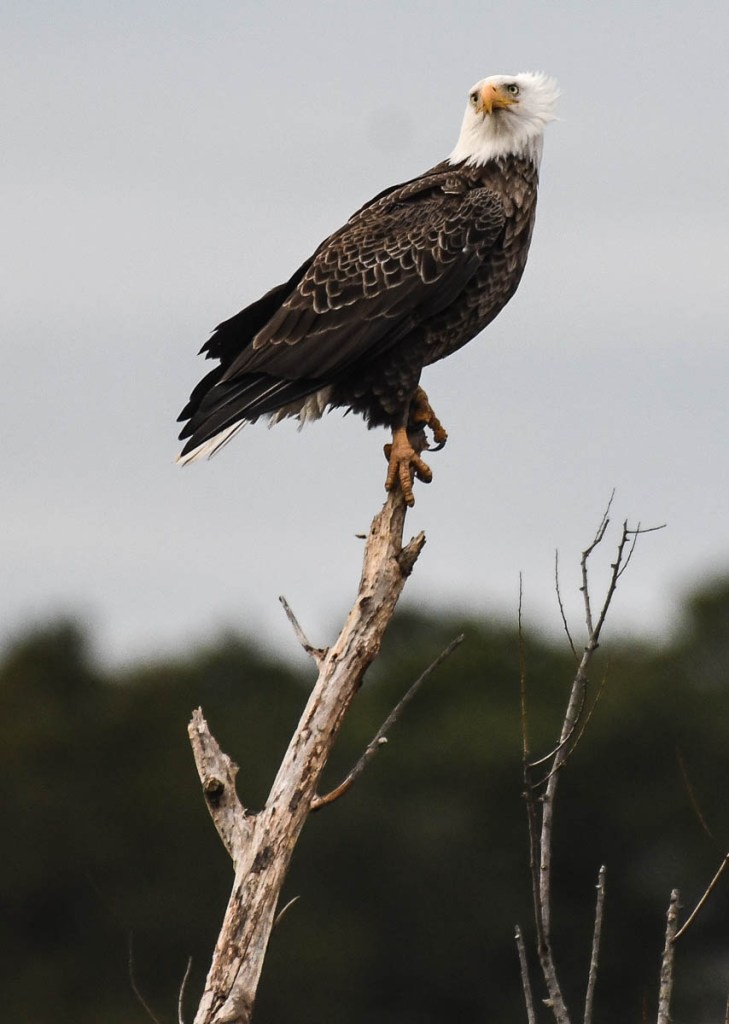 A mature Eagle at the Blackwater refuge in Eastern Maryland.

Another view of the juvenile Eagle spotted at Blackwater.