Merlin’s new Sound ID is like having your...
Tree Swallows caught in midair: A rare glimpse...
Birds and Flowers: More than just a pretty...
Catching up with the California Condor: A comeback...
Our 10,000-mile update: Traveling the U.S. and writing...
What’s that tune? New, improved Merlin app has...
“He’s close.” On the trail of a rare...
The lion’s impressive, but don’t miss these visiting...
Going fishing: The Reddish Egret shows off its...
The perfect gift: A wild warbler party on...
BirdingBirds storiesMigration 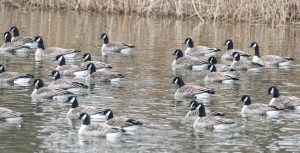 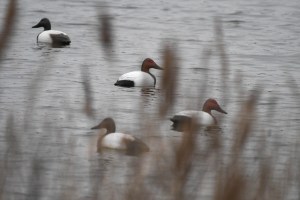 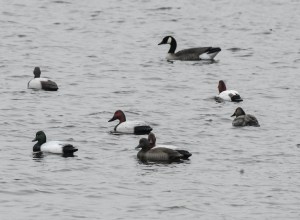 Only a couple of Canadian Geese — and of course the two of us — were fooled by the decoys.

They were decoys. Every one of them. Bobbing in the water trying to fool their fellow ducks.

Beverly saw it at the same moment. We were standing on the side of the road watching fake ducks. It was impossible not to break out laughing, which we did as we hustled back to the car before anyone saw us.

This website is devoted to what the birds have to teach us. This time the lesson was rather blunt: We’re not quite as smart as the ducks – who at least on this day weren’t falling for the decoy’s ploy. Not a single real Canvasback swam among them.

We all need to be humbled at least once a day.

Very funny! I love the geese bobbing along beside them.