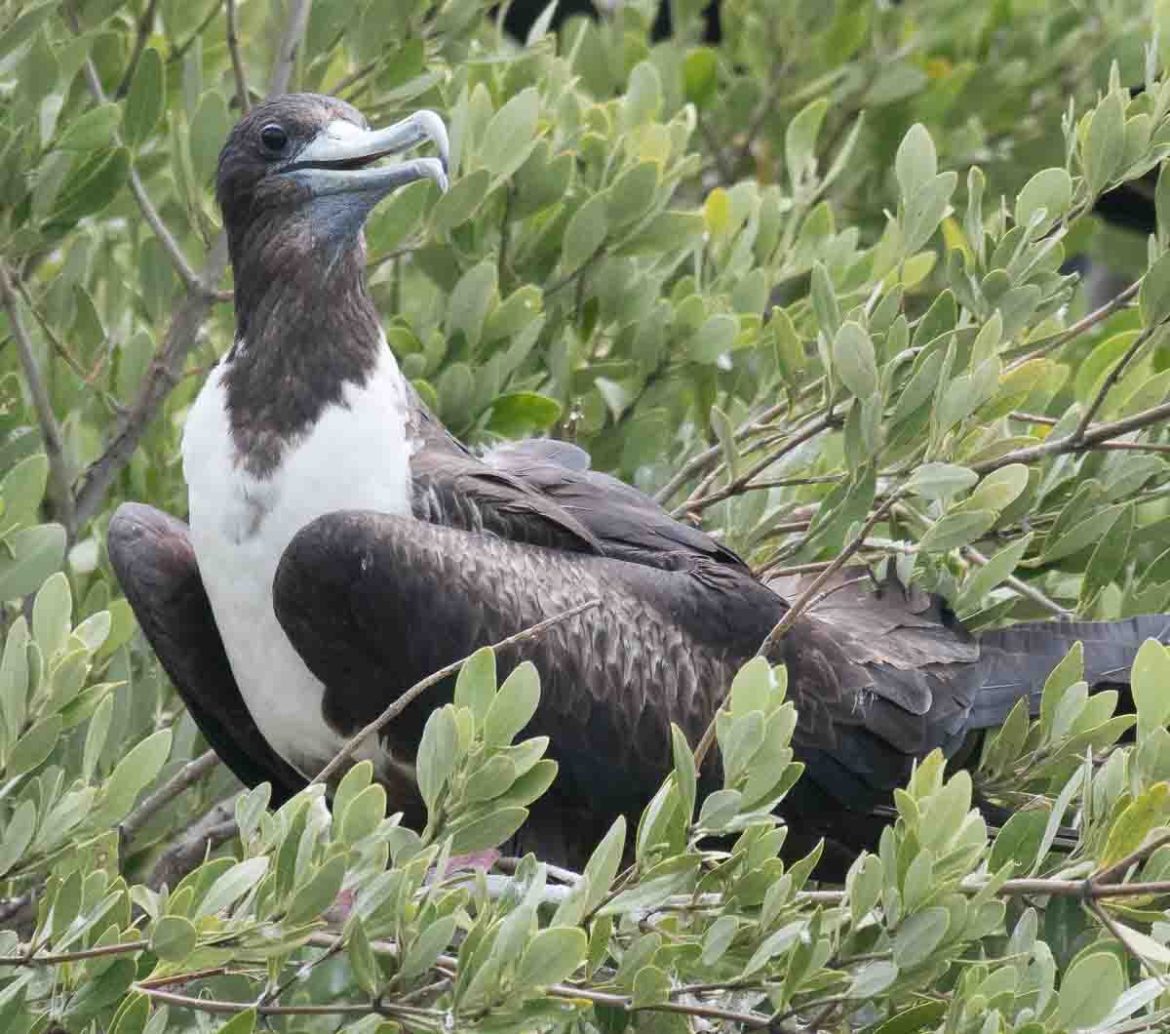 The scene comes out of a primordial past: Five thousand Magnificent Frigatebirds — one of the most ancient and acrobatic species on Earth — circle in sync above a remote island off the coast of Mexico. Unlike most of the breeding grounds for the Frigatebird, the small island of Isla Contoy is open to visitors.

One year ago this month, we got a chance to witness this colony of Magnificent Frigatebirds in the midst of the birds’ unusual mating rituals. With the breeding season starting once again, we wanted to delve into a love story that’s remained relatively unchanged for millions of years.  It attracted the attention of Charles Darwin when he was studying on the Galapagos Islands to get a glimpse of the origins of life.

The Magnificent Frigategbird is the only bird that has a superlative built into its official name. And with good reason, says veteran researcher Betty Anne Schreiber, who began studying them on isolated Pacific Islands in late 1970s. 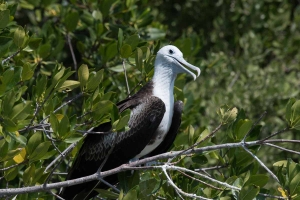 “Nobody really knows how they got the name, but I suspect it has to do with how amazing they really are,” she said.

There’s much about the Magnificent Frigate bird that stands out: With an enormous wingspan of up to seven feet and a forked tail they use in flight, Frigatebirds are true acrobats. They can fly over the ocean for days without touching down. A slightly demonic look — along with a talent for wresting food from other birds — has earned them the nickname “Pirate Bird.” Darwin dubbed them the “condor of the oceans” for their endurance. 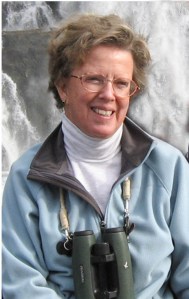 But what is most fascinating, says Dr. Schreiber, is how long the Frigatebird has been on Earth — relatively unchanged for millions of years. That’s the feeling you get when you venture onto Isla Contoy and the domain of the male Frigatebird in the midst of attracting a mate.

First he inflates a gland sac in his throat so that it looks like a red, nearly heart-shaped balloon. Then he waves his head around to show off the balloon while clattering his beak. The females fly in circles overhead, reviewing their options.

Dr. Schreiber pointed out that many species of birds have distinct rituals meant to attract one another. “They all have something they do where birds interact and they decide whether they like each other,” she said. “But we have no idea how this one came about.”

Mystery surrounds many practices of  the Frigatebird — as well as most seabirds that spend their lives far from human eyes. Research is cumbersome and expensive. That’s true for all five species of Frigatebirds — Lesser, Greater,  Magnificent, Ascension and Christmas Island. 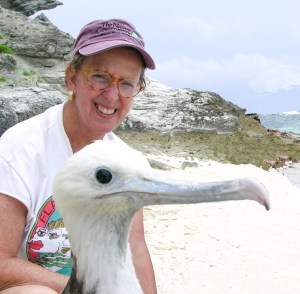 Dr. Schreiber with a Frigatebird

Dr. Schreiber and her late husband Ralph, together a renown research team, helped to change that when they headed out into the Pacific islands decades ago. At that time, most of what was thought to be true about Frigatebirds was based on guesses — and much of it was off base. A large group of seabirds in the region had been banded, then forgotten. The Schreibers picked up the research and slowly pieced together much about their story.

They discovered that these birds developed sea-going routines that made them adaptable and versatile enough to survive three ice ages. The Frigatebirds know how to find the ocean currents that bubble up to produce fish, and they return to the same breeding grounds each year as long as conditions are good. They are talented at rearing and protecting their young, which has helped to keep their numbers strong. 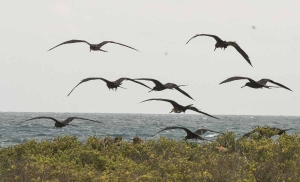 And they are tough old birds, literally. Frigatebirds can live 50 and 60 years — a long time for any creature.

The Magnificent Frigatebird is mostly a tropical bird, found in the ocean, islands and coasts of the Caribbean and Central and South America. But they will venture into Florida and California and have been spotted farther north as well.

Dr. Schreiber’s research has helped determine much of what we know about the species. She co-wrote the Frigatebird segment of the Cornell Lab of Ornithology’s Birds of North America website. There’s still much work to be done on Frigatebirds, she said, including what to make of their longevity.

That’s why island projects like the one in Mexico are so important. Here is a gallery from Isla Contoy that gives you a sense of the scene during mating season: 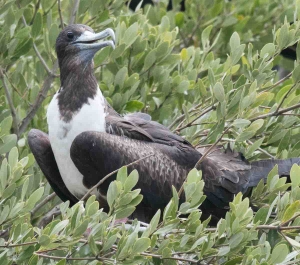 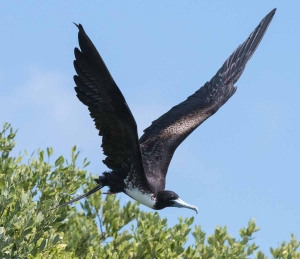 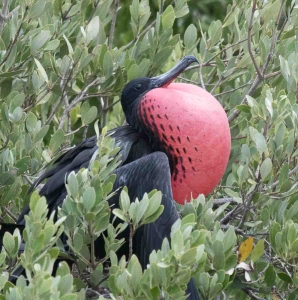 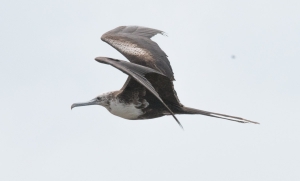 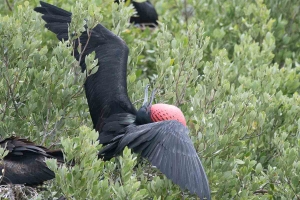 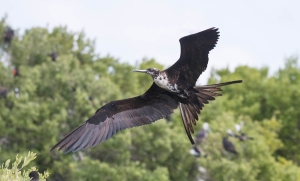 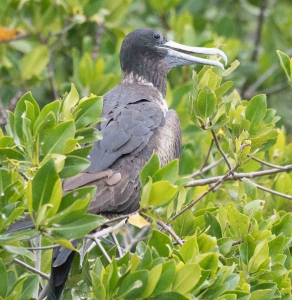 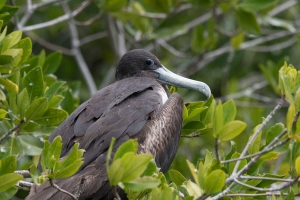 Very interesting these Frigate birds. Guess we have a ways to evolve to reach their level of resilience. Then I am from Brooklyn parts, so Frigate about it!