Two tanagers talk up a storm: So what...
Lessons in generosity: Birds benefit when we’re all...
How is a warbler like an apple-glazed donut?...
Ode to a Red-tailed Hawk: Electrifying, grace and...
Fledglings take flight: Good news for the nation’s...
Spring migration helped save our sanity; can the...
You’ve started down the path to becoming a...
What a show: Battle of the Hummingbirds reaches...
Beverly’s Basics: Four tips for getting the most...
The Ovenbird takes to the stage
Daily Archives

A ray of sunshine, the Goldfinch takes center stage 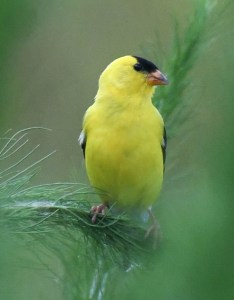 The American Goldfinch is a symbol of summer. Impossibly yellow in May, June and July, they stand out like flashes of sunlight flitting across meadows, farmlands and treetops.

Then as the summer ends, the intriguing cycle of nature begins. Like a debutante with a closet full of clothes, the Goldfinch changes to suit the season. In the fall, it pulls out its muted colors. In the winter, it’s nearly unrecognizable as it molts into a splotchy, mostly brown outfit.

This makes the Goldfinch’s spring and summer style all the more pronounced. Despite their small size, even a lone Goldfinch will stand out for its sharp yellow profile punctuated by an orange beak. When they travel in groups of eight or ten, as they often do, you’ll also be treated to a sweet, warbling concert.

Here’s an excellent graphic from the Sibley Guides that shows the changes the Goldfinch morphs through each season. 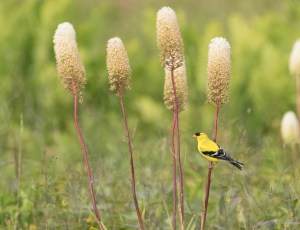 A few summers ago, on a birding trip through the South, we stopped to camp near Tupelo, Mississippi, next to a drained lake that had been overtaken by grasslands.

The field was like a photo studio for Goldfinches, vegetarians who live for the seeds plentiful in fields like this one.

Right away we spotted the first of many, moving from reed to reed, working on dinner. They gave me one of my favorite photos, this one of a male perched on a stalk as if posing for a museum piece. (Not a farfetched idea, it turns out.)