Cedar Waxwings are dining their way north: Don’t...
Tanagers are one big, beautiful family of birds....
They unlock the Earth’s treasury of hummingbirds. Does...
Pittsburgh’s National Aviary takes you around the world...
“He’s close.” On the trail of a rare...
It’s a bird-eat-bird world: Pileated Woodpeckers on the...
Tree Swallows caught in midair: A rare glimpse...
What a show: Battle of the Hummingbirds reaches...
Can we save this globe-trotting sandpiper? Only if...
Taking off in a cloud, Snow Geese create...
Bird of the WeekPhotography 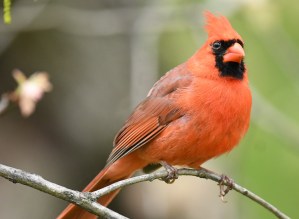 But then it switches to a gentler tune and all is forgiven.

If you’d like a reminder, here are recordings from the American Birding Association. And here from Audubon, down the page to the right, is a long list of the cardinal’s biggest hits. 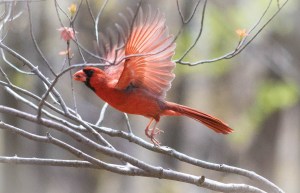 The cardinal’s dominance doesn’t stop with its song.

This is the early riser that I suspect of waking us up each morning.

While many bird species are in decline, the Northern Cardinal has been expanding its reach the past century until it can be found all across the northern, eastern and southern U.S., and reaches over parts of the southwest. There’s a whopping 120 million Northern Cardinals in the hemisphere, decorating the landscape with flashes of bright red and orange.

Cardinal don’t migrate, so they can spend energy on other things, and their growing numbers reflect those strengths. Their omnipresence has been rewarded with popularity. Seven states have named the cardinal as their state birds. 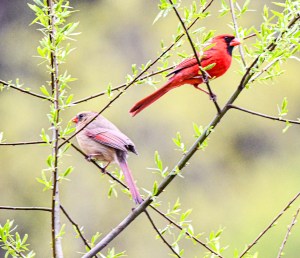 A male and female pair

To go with its memorable songs, the cardinal is a striking bird in any season. The male remains bright red throughout the year, and the females a muted gray orange with a bright orange beak. With the springtime growth pushing out from every branch, the plumage of a pair of cardinals is combination worthy of a postcard.

Thank you for reaching the end of this post about one approach to birding in the midst of quarantine. Watch for Beverly’s take on this topic next week.

In a world turned upside-down, birds can help restore some sanity

Those photos are phenomenal!

Thanks so much for your kind note. Hope you’re doing well in the midst of all this strange time. Why don’t we find a time to get on the phone and compare notes. We’re free today, and also tomorrow, and the next day, as well as the following week and also the next couple of months.

Hmmm. I was wondering because walking my dog a few days ago in the rain I saw many of them everywhere I looked. it made me feel lucky. It seems maybe they don’t mind the rain either. Nice to feel it is ok to get closer than 6 feet too!