The magic of birds in motion
PhotoPost: How the Bluebird became the symbol of...
Rebuilding troubled species takes decades of patience and...
Hatchlings! Grasshopper Sparrow rescue mission finds a dose...
A holy rite of spring: A Prothonotary Warbler’s...
New Flying Lessons column: What are Florida Birds...
A Green Heron’s Fishing Lesson: Knowing just when...
Flocks of new birders are turning out, which...
The transformation in bird research may hold the...
What the Grasshopper Sparrow is teaching us as...
BirdingBirds storiesHow we're birding nowPhotography

Grounded: A world-traveling bird expert brings the migration to his own back yard

In his job as president of American Bird Conservancy, Mike Parr spends most of his time making sure millions of migrating birds survive the trip – and have a safe place to flourish on either side of the journey. 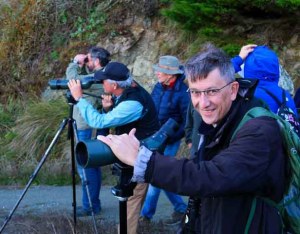 Mike Parr on one of the birding expeditions he leads all over the hemisphere. Photo by Bruce Beehler.

For Mike, there’s never really a “normal” migration by most people’s standards. His spring migration might include a visit to the upper coast of Texas, a swing over to New York’s Central Park, a trek to Northwest Ohio for the Biggest Week in American Birding festival, and finally, the marathon World Series of Birding in Cape May, N.J.

So how is Mike birding now, in the midst of a pandemic lock down?

“I went from the world is my canvas to the back yard is my canvas,” said Mike. (See my note at the end of this post for a summary of the conservancy’s work and mission.) “I work and travel constantly, so backyard birding has never been a thing for me. But I thought, if I’m going to do it, I want to make it super.” 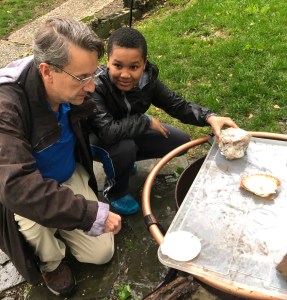 Since mid March, Mike has set out to transform a small yard on the outer edges of Washington, D.C., into a birding wonderland.

There’s also an “Oriole feeder” of orange sections impaled on a tree branch. A fake owl had to be added to deter squirrels that kept attacking his massive container of birdseed.

“I’ve basically tried to create a bird Airbnb,” he said. “I want to know how many birds can I see in a small yard in Washington, D.C.”

By the end of April Mike had logged 54 species, but he’s hoping for 75.

“I might get there,” he said. “I thought it would be a bit better by now but it’s been a late spring. The winds haven’t been perfect and we’ve had a lot of rain. But the dam is going to burst here soon.” 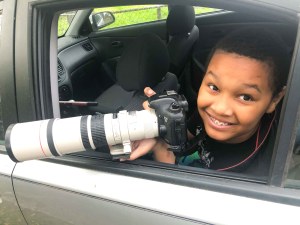 Charlie Parr in what may look like a car, but is actually a mobile bird blind in their back yard. Photo by Mike Parr.

When that happens, Mike and his 12-year-old son Charlie will be ready. The pair created a “water feature” consisting of an old fire pit with a sprinkler held in place by rocks and shells. The key component is a piece of bark for the birds to land on.

“We spent a lot of time setting it up so we can get nice photos,” Mike said.

The water feature was strategically placed adjacent to the family’s old car in the back driveway. 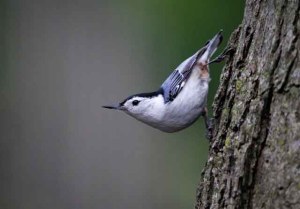 Charlie is his dad’s partner in crime.

“He sits in the back seat and I sit in the front seat, and we can drive the car 12 feet in either direction to get a really great photo.”

The late spring has given them a chance to practice on common species like finches and sparrows before the fast-flying warblers arrive. 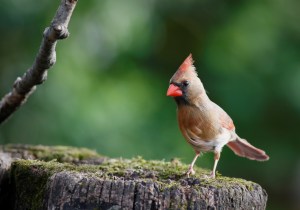 As it turns out, the pandemic has produced an interesting change in perspective.

“I realized I had hundreds of photos of specialty birds but I didn’t have really good photos of some of the more common birds,” Mike said.

Any bird can become the subject of a classic photo if it’s photographed well, he said.

“I figured if I’m going to be stuck here, I might as well get a really good photo of a House Sparrow.” 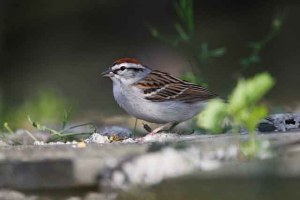 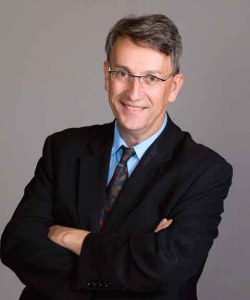 Mike Parr is president of American Bird Conservancy, an ambitious organization with a big agenda — to preserve and protect birds all across the Western Hemisphere by eliminating as much as possible that can come between a bird and its survival. That’s a lot of things, and you can learn more about the scope of the conservancy’s work on its website here.

As for the migration — it’s no small feat to conserve birds that travel 4,000 miles or more each year across continents and international borders. The conservancy works to ensure that priority species have the habitat they require at all stages of their life-cycles: breeding, wintering and stopover on migration. It calls these priority habitats BirdScapes.

“Migratory birds are in all kinds of habitats,” Parr says. “They’re in agricultural areas. They’re in the surrounding forest. They’re almost everywhere. We can’t properly conserve them by setting up small reserves, but we can’t protect absolutely every acre either. We have to define landscapes that are big enough to make a difference, but manageable enough that we can deliver conservation and make change happen.”

The remaining landscape — that which is nei­ther fully protected nor fully developed — is where ABC and partners focus their efforts.

“You take the data that you have, and you look to see where you can make the most positive change for birds,” Parr said. “It’s the junction of science and opportunity.” 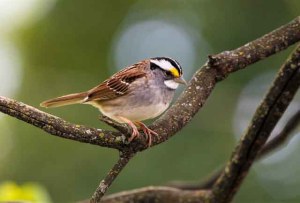 Feeling trapped in your yard? This tool puts...