Coming soon: A foolproof way you can instantly ID that birdsong

For more than a year, a CD of birdsongs was stuck deep inside our car stereo and would start playing without warning on every drive. By the time we finally dislodged the CD, Beverly had committed almost all the songs to memory while I was still struggling to tell the Tufted Titmouse from the Song Sparrow.

The art of birding by ear has always separated the truly gifted birder from the rest of us. But help is on the way for those of us who struggle. A scientific research project designed to track birds by their sounds has turned out to have a wonderfully practical use for the common birder.

It can decipher birdsongs the way the Shazam app identifies music.

We’re devoting two weeks on Flying Lessons to the art and science of birdsongs. Today’s post looks at modern research’s advances in tracking songs and calls. Next week, Beverly will tell her story of how learning specific songs can vastly enrich your birding — and she’ll share ideas on how to make progress. 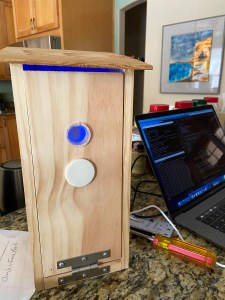 The latest form of the Haikubox. The poetic name is intentionally vague so that future versions might be used for a wider variety of research purposes.

The most interesting development on the science front is a new device, called the Haikubox, coming out later this year.  You’ll set it up in your yard or porch, and it will identify every birdsong within reach of the recorder. Then it will send a stream of IDs to your computer or phone, providing a comprehensive census of nearby bird life.

“We think we have a good idea,’’ said David Mann, head of Loggerhead Instruments, a small Florida company working with the Cornell Lab of Ornithology to develop the device. “It’s going to be a great learning tool.’’

At the same time, smartphone apps that deliver precise IDs are now becoming available. Unlike early versions of these apps, the latest draw on thousands of songs and call samples that make them far more accurate. 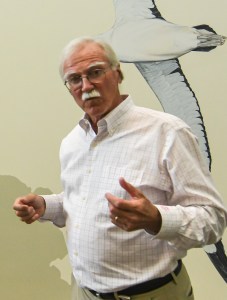 John Fitzpatrick, director of the Cornell Lab, says people have been clamoring for just such a tool for years. “If I had a dollar for every time somebody asked when there’d be a Shazam for birds, I’d be able to fund all this research with that alone,’’ he said.

The lab itself is behind much of this progress.

Cornell established its Center for Conservation Bioacoustics to apply the study of sound to bird research. Since birds are so vocal, scientists found they can track migration, breeding and overall populations by recording their calls and songs. The field took off when tech companies started sharing their software for deciphering photos and text for internet searches.

Over the past several years, Cornell and an array of academic and commercial partners perfected the recording technology, sound equipment and artificial intelligence applications used to analyze the bird recordings. Today, Cornell has an archive of 6,000 species it can identify through bioacoustics.

The beauty of bioacoustics is that it enables research in places too remote to easily reach, in  rain forests and on distant islands, for instance, where scientists are studying endangered species. (Here’s a link to our story on this science that ran in the Washington Post in January.)

The same research mechanics are powering the tools for deciphering songs and calls for birders. 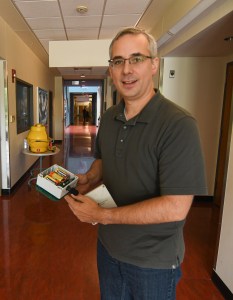 The Haikubox, which looks like an oversized wooden birdhouse, will keep an ongoing record of every song and call it collects. It converts the sounds to spectrographs and compares them against its library of sounds. Depending on the weather and noise levels, it will collect sounds up to several hundred feet away.

“You can put it in your backyard and hook it up to your wireless network,’’ said Holger Klinck, director of the Cornell bioacoustics center. “It will continually detect species 24/7.

“It’s a gateway to bring new people into the world of birds and get excited about it,’’ he said. 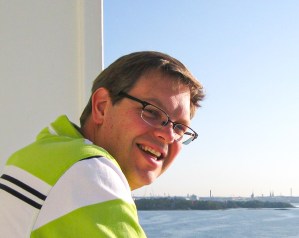 Loggerhead’s David Mann said he’s not exactly sure who all might be likely to buy one of the devices, which are expected to cost under $500. The most likely customers are birders, but he hopes it will appeal to all kinds of people with an interest in the environment.

As he tests out a version of the Haikubox at his home in Sarasota, Florida, he found he was suddenly much more interested in the birds coming through. “I found I was paying more attention,’’ he said. “Since you get real time feedback. I’d hear something and say, ‘What was that?’ You can go and look.’’

The Haikubox joins a long line of birdsong recognition systems, most of which are apps that tend to work for only a small sample of songs — if at all. Here’s a review of some of the early versions, and here’s one of a popular app called Song Sleuth that’s draws on a library of 200 species and gives you a choice of likely contenders.

Cornell’s own app called BirdNET has set a new standard for accuracy, since it draws on the lab’s huge library of sounds. BirdNET’s Android version has been downloaded a million times. Its Apple version was supposed to be available last year, but has been slow to reach market. Cornell makes its research available for free to other makers, so the quality of these apps should get steadily better. 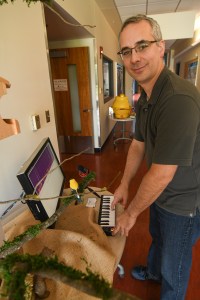 Holger Klinck, looking over the system used to test the bioacoustic network set up around the lab’s campus

This is good news for birders – but also for birds.

The results of the sightings on the apps, the Haikubox and whatever other products come along all help feed Cornell’s research with data on where birds are and where they’re going.

Like the eBird apps, which birders use to record the birds they see, the data has fueled the world’s most successful citizen science project and has helped track bird populations all over the world. The birdsong identifiers will add to that store of knowledge – and will be even more accurate because of the precision of these devices.

“It’s all about developing methods that allow us to do a comprehensive job of assessing what’s going on in remote areas. That’s the end goal,’’ said Klinck. “The data is what drives conservation.’’

Loggerhead Instruments is testing the Haikubox with a network of beta users around the county. We’re going to be one of these testers starting this summer and will post our experiences on Flying Lessons from time to time.

And finally, here’s a video that gives you a sense of what you see on your computer as birds are identified by the Haikubox:

[…] by ear takes plenty of work, but… Coming soon: A foolproof way you can instantly… PhotoPost: How the Bluebird made its comeback —… The magic of birds in motion […]

That is so cool! I’m ok with identifying local bird songs around the house but warblers are another thing altogether!