Cedar Waxwings are dining their way north: Don’t...
Tanagers are one big, beautiful family of birds....
They unlock the Earth’s treasury of hummingbirds. Does...
Pittsburgh’s National Aviary takes you around the world...
“He’s close.” On the trail of a rare...
It’s a bird-eat-bird world: Pileated Woodpeckers on the...
Tree Swallows caught in midair: A rare glimpse...
What a show: Battle of the Hummingbirds reaches...
Can we save this globe-trotting sandpiper? Only if...
Taking off in a cloud, Snow Geese create...
FeaturedSpeciesVideo 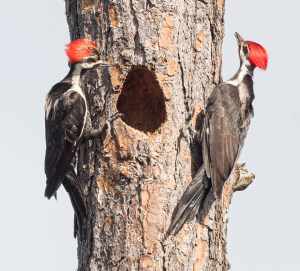 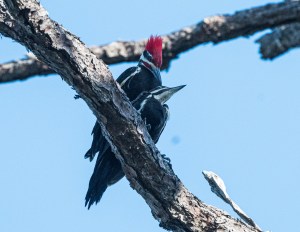 One day, they flew away from their worksite and met at the top of a nearby tree. It turned out to be a kind of date: He made his move. She reciprocated. Then they sat side by side for a few minutes, a rare sight for these busy birds. Pileated Woodpeckers are known to stick together through the nesting season, and these two were constantly with each other after that.

Almost everywhere we look this time of year, birds are pairing up. A couple of Sand-Hill Cranes have found each other in the campground itself and waltz around like permanent residents. Two Bald Eagles are roosting not far away. The Florida Scrub-Jays and grasshopper sparrows we’ve been following and writing about in the center of the state are moving toward mating season. 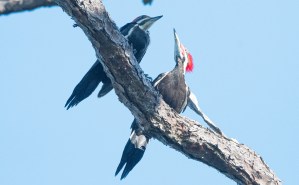 The male and female look similar, but the male has a red stripe on its head that the female doesn’t.

But none has shared their spring season the way these woodpeckers have.

Within a week, their cavity was deep enough for the female to climb inside and go to work on the interior decorating. The male spent a portion of the day on the top branches of their tree, scouting for trouble, then shimmying down the tree to inspect the progress at the nest. 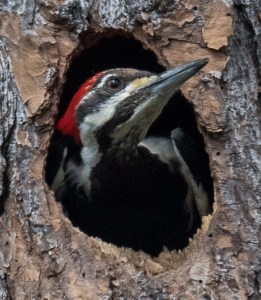 The female Pileated getting comfortable in their best

Before long, she was ready to spend her days inside. When the light was right, you could peer through the hole and see her arranging and rearranging herself. Pileated Woodpecker eggs take about 15 days to incubate, then the chicks spend another month or so in the nest before fledging. That means we won’t get to see the offspring, since we’re leaving at the end of the month.

But just getting to watch this stage has been a highlight of our spring, and a reminder of the pull of nature and the power of romance, no matter the species. In a few weeks, all across the country, we’ll begin to see a new generation of birds yipping for food, peaking out of nests and beginning to make their way in the world.

Among them, if all goes well, will be a couple of freshly minted Pileated Woodpeckers.

And here’s a gallery of some of the scenes we’ve been lucky enough to watch these past few weeks: 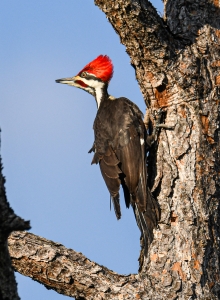 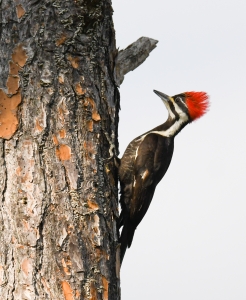 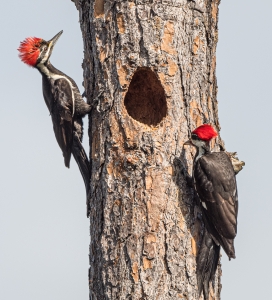 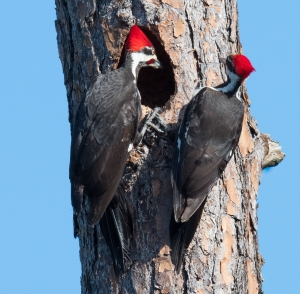 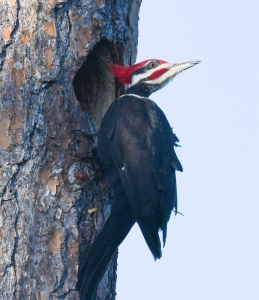 How beautiful. I’m so in awe of these beautiful birds. I have a male that visits one of my feeders. Hopefully, I will see a female this spring. Thanks for sharing your story.