A Painted Bunting sings with all his might in a Bayou south of New Orleans.

We’ll never forget the first time we saw a Painted Bunting, singing with all its heart, deep in a marsh near New Orleans. For four years we had been searching for this clown-colored bird, but we always seemed to be a week behind the Bunting’s migration path. When we heard its unmistakable trill that morning, Beverly was standing on a bench. She got so excited, she toppled right off.  And  then we stood there in giddy awe, watching and photographing this precious performance for almost an hour.

It’s easy to see why there’s a boom underway in bird watching, documented recently in an article, here, in The New York Times. People get attached to birds in all sorts of ways, but why do so many of us get lured so deeply in? Ask a group of birders, and  you’re likely to hear things like “it’s the lure of the hunt, spending time outdoors, the astounding beauty of the birds themselves.”

Some days you won’t see a darn thing. And so when you do end up with a glimpse, and sometimes an entire symphony, endorphins can go haywire.

If you need a dose of sheer awe, grab some binoculars and go find a bird.

Last summer we packed up our Airstream trailer and traveled more than 9,000 miles in a sweep through the South and along the Gulf coast, then up through New England and eastern Canada. We saw a dozen new warblers, puffins, hawks, humming birds, vireos, kingfishers and flycatchers.

Along the way, we came to a realization: Birding isn’t only about finding the species you’re after. If we take a step back, if we look at the bigger picture, there are all sorts of lessons to be learned from the birds around us.

No other segment of wildlife is so constantly on display – available to all, no matter where you live – often by simply looking up. Birds play a prominent role in teaching us about the state of our environment, including climate change, one of the most important topics of our time. 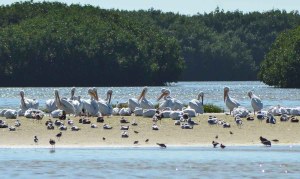 White Pelicans gather on a remote island off the coast of St. Petersburg, Florida. 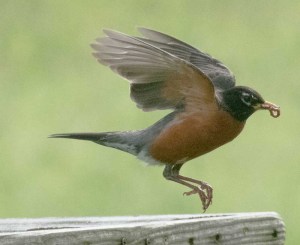 An American Robin on the hunt

But as descendants of dinosaurs and one of the longest-running species of the Earth,  there’s so much more to know about mating, feeding, breeding and how birds manage to pull off their mystifying migrations season after season.

A Cardinal on takeoff

Only recently have we come to realize how intelligent birds are. Researchers have discovered startling practices that reflect a level of smarts, the use of tools and evidence of emotions never before imagined. The 2016 book, “The Genius of Birds,” by Jennifer Ackerman, explores the intelligence of birds and their humanity — right down to the way crows will leave gifts for people they get to know and like. 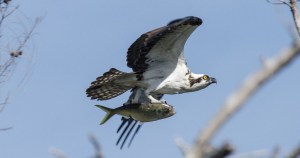 An Osprey carries a good-sized fish off for lunch.

Birds possess powers that people have always longed for, chief among them the ability to fly. We’ve already learned our own version of flight, partly by watching how birds do it. Today, researchers are studying birds for further flying abilities, such as how Hummingbirds are able to fly backwards and how flocks of birds can maneuver in a remarkable synchronized fashion. The avian aspects of flight may eventually teach humans things like how to better program drones.

When we venture into the world of birds, we’re forced to adapt to their way of doing things. One of the most powerful lessons we’ve been working on has to do with patience, stillness, and the need to just stop talking and listen. 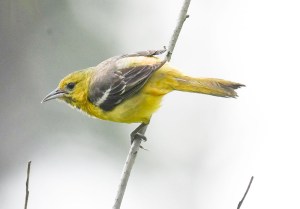 The two of us experience birding in slightly different perspectives. Beverly is more attuned to what the pursuit requires of us. Anders is drawn to lessons in how birds behave and how they adapt, thrive and sometimes fail to thrive.

But both of us came home from our summer journey thinking about what we can learn on the birding trail, hence this website, Flying Lessons. We’re still novices compared to many of the veteran birders we’ve met. But as life-long journalists, we realized we wanted to try and share the wider stories, and Anders’s photography, as we strive to learn about – and to learn from – the birds around us.

Flying Lessons: What we're learning from the birds

Flying Lessons: What we're learning from the birds
We had a surprising encounter when we hung up our hummingbird feeder during a recent camping trip.

The story of how Baltimore Orioles are raiding hummingbird feeders for a drink of the sweet liquid both birds love.
134 5    View on Facebook

Flying Lessons: What we're learning from the birds
Two significant studies on the state of wildlife are out this week. One is the latest version of the State of the Birds report (below) that tracks populations over time, and the other is a sweeping, global look at the declines of wildlife overall: https://www.nytimes.com/2022/10/12/climate/living-planet-index-wildlife-declines.html https://www.audubon.org/news/2022-us-state-birds-report-reveals-widespread-losses-birds-all-habitats-except

In 50 years, birds have increased overall in wetlands, a singular exception that shows the way forward for saving birds and benefiting people.
4    View on Facebook

Flying Lessons: What we're learning from the birds
Here's a good summary of the new Bird Migration Explorer tool that tracks the flow of birds during migrations.

Flying Lessons: What we're learning from the birds
Check out this new tool just released by the Audubon Society that lets you track migrating birds with powerful, rich mapping software drawing on a wealth of information.

With this revolutionary new tool, anyone can follow hundreds of species on their epic journeys and discover challenges they face along the way.
4    View on Facebook

Flying Lessons: What we're learning from the birds
Here's the scene at what amounts to an airport for hummingbirds, plus the story behind it. https://flyinglessons.us/ https://youtu.be/_1vbGpYeetY

We take you to Northern Ecuador, where there are more species of hummingbirds than anywhere else in the world, to a crowded feeder that includes more than a ...
23 3    View on Facebook
To see the Instagram feed you need to add your own API Token to the Instagram Options page of our plugin.
Oops, something is wrong. Instagram feed not loaded