In our early days on the trail, it took a while to realize that birding has its own, largely un-communicated set of dos and don’ts.

I’ll never forget the morning we pulled into a nature preserve parking lot alongside a group of folks wearing khaki vests and putting away cannon-sized cameras wrapped in camouflage coating.

We were excited to find characters who looked so much the part. These had to be “real” birders, and we had a lot of questions. We got out of the car, grinning and waving. They practically jumped into theirs as if we were planning to attack. 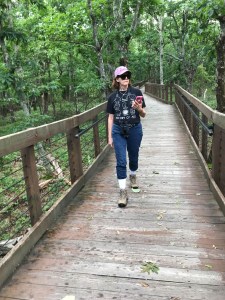 In the early days, some birders ran when they saw me coming with my pink hat and pulled up socks.

Could it have been my trusty pink cap? The white tube socks pulled over my cuffs to avoid getting bitten by a tick? In the birding world, we were as obvious a cliché wearing our beginner garb as they were in identical bird-nerd outfits.

It turns out there are good reasons for the birding nerdyness.

“Birds are very sensitive to colors and often view them as a threat,” said Dale Rosselet, the vice president for education at New Jersey Audubon. “So you don’t want people moving through the forest with hot pink on. Wear muted colors, and try to blend in with the surroundings. If you’re walking through a forest, white stands out like a sore thumb.”

Wardrobe fundamentals was just one lesson I learned from Rosselet during a walk with 20 other birders of varying skill levels at the Cape May Birding Festival last month. At one point she trained her telescope on a distant gull and turned to face the group.

“Here’s how we’re going to do this,” Rosselet said. “Each person takes a quick look through the scope, and after everyone has a chance, you can come back and look again.”

Taking turns may be kindergarten basics, but after leading hundreds of field trips and tours, Rosselet has seen many a person forget their manners in the presence of a beautiful bird.

“People get excited. They’re going to rush in, they’re going to squeal – we’ve all done it,” she said. “The main thing is to try and remember you’re in a group, and everyone is trying to see.”

In a recent interview, I asked Rosselet for more advice on how to bird well with others. For starters, go on an organized walk with a trained leader.