It’s almost mating season for the Florida Grasshopper Sparrow, a spring ritual dating back thousands of years on the Florida prairie. But this may be the year that determines whether a rescue mission can turn things around for the country’s most endangered bird. 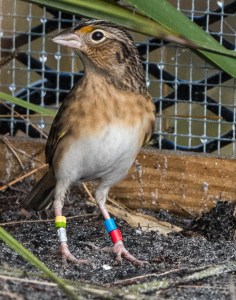 A year-old grasshopper sparrow just before its release into the grasslands. Photos by Anders Gyllenhaal

Every week starting this month, researchers are releasing a half dozen or more young sparrows raised in captivity to try and boost breeding in the wild and stabilize the overall population.

The releases are the final step in a long, complex restoration plan that’s taken shape over the two decades since the Florida Grasshopper Sparrow’s sudden collapse. Now researchers will be watching the sparrows’ every move as they hope nature will take its course.

Juan Oteyza, the state research scientist who oversees the project along with Karl Miller, watched the first batch of sparrows disappear into the Florida prairie south of Orlando one morning earlier this month. 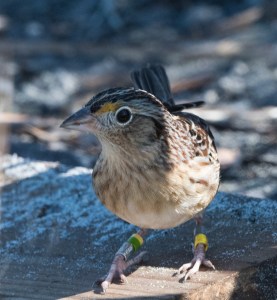 That isn’t entirely true: It’s up to the sparrows to fan out over the grasslands, find mates, build nests and raise a new batch of chicks. But a team of human helpers will be on hand to monitor the mating rituals, locate the nests and then raise them out of the reach of flood waters. They’ll also encircle the nests with fences to ward off predators. Each new family is tracked daily for five months to see if the sparrow population increases.

Here’s a video of this spring’s first release, taken with a remote camera, so the picture is slightly fuzzy. But you can see the sparrow’s hesitant reaction to the prospect of freedom — followed by a plunge into the grasslands: 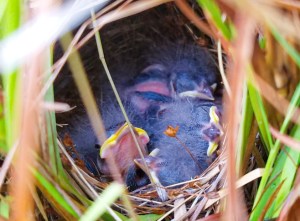 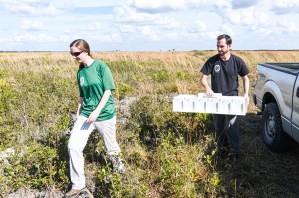 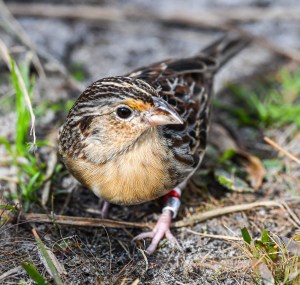