Cedar Waxwings are dining their way north: Don’t...
Tanagers are one big, beautiful family of birds....
They unlock the Earth’s treasury of hummingbirds. Does...
Pittsburgh’s National Aviary takes you around the world...
“He’s close.” On the trail of a rare...
It’s a bird-eat-bird world: Pileated Woodpeckers on the...
Tree Swallows caught in midair: A rare glimpse...
What a show: Battle of the Hummingbirds reaches...
Can we save this globe-trotting sandpiper? Only if...
Taking off in a cloud, Snow Geese create...
BirdingVideo 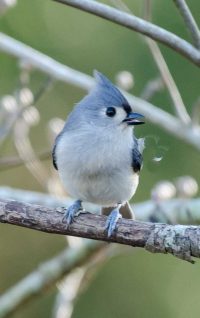 What do you get when you mix a songbird’s chirp with a banjo?

We found out one day last spring when we were camping near Charlottesville, Va., alternating between long birding walks and sitting by the fire. On a perfect afternoon, I dragged a chair over to a nearby creek and started tuning my banjo to play a few tunes.

That’s when a Tufted Titmouse chimed in. While not exactly beautiful music, the encounter isn’t like anything I’ve ever heard before. Here’s what happened:

A friend of ours, Robbi Farrell, pulled out her phone and videoed the scene as the Titmouse joined me in a long and lyrical duet of alternating tweets and twangs.

A Tufted Titmouse — not the one in a duet with my banjo — but a cousin a spotted some time later.

At times, it was hard to tell who was leading whom.

Birds are always offering us lessons of one sort or another if we’ll listen. They have much to say, between mating songs, scolds to competitors and danger calls when a predator is approaching.

I couldn’t tell which of these I was hearing, and I only got a glimpse of the Titmouse. But it’s a conversation I’ll always remember. With the winter moving in and the birds heading south, this seems like the perfect time to share this video. We hope it puts you back in the springtime woods at least for a moment.