The Summer Tanager, the only completely red bird in North America, is our Bird of the Week in honor of Valentine’s Day. 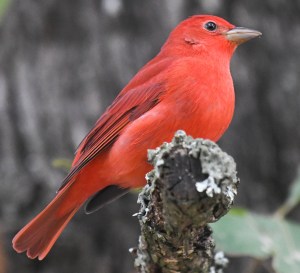 It’s easy to see the male’s deep red coloring on the cover of a Valentine’s Day card. But this goes further than feathers. Like true love, the Summer Tanager isn’t easy to find. He tends to stay above the fray, in the high branches of the forest, usually playing hard to get.

If you want a glimpse, you have to go looking for him – and be ready to commit to a sometimes lengthy search.

I’ll always remember our first encounter with a Summer Tanager, which came four years ago on Maryland’s Eastern Shore near Pocomoke City. True to form, this bird was little more than a flash of bright red at the top of a tall tree. He’s easy to mistake for a Cardinal – but then you notice that the color is more vivid and the beak is entirely different. Plus he sings a distinctive song, somewhat like a Robin, but in a kind of slurred whistle. 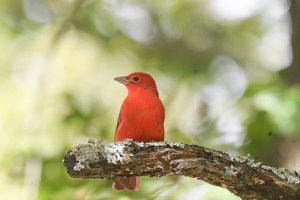 I spent the rest of the afternoon looking for this seductive bird, which by then I figured out was a tanager. Shortly before the sun went down, he returned: As red as a ripe tomato, offering his striking profile for just long enough to catch a few photos. Not far away was the female tanager, identical in form but dressed all in yellow.

It was a sight worth waiting for.

Birders in most of the U.S. will have to wait before seeing this Bird of the Week. The tanagers spend their winters on a romantic trip to South America. By the time they return in the spring, Valentine’s Day will be long since passed – but here’s one more photo to celebrate the tanager’s striking beauty and hold a spot in your heart for this magnificent species. 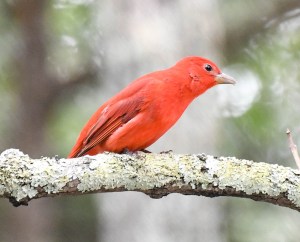 Can you still be Valentines living in an Airstream? Love is on the line