Cedar Waxwings are dining their way north: Don’t...
Tanagers are one big, beautiful family of birds....
They unlock the Earth’s treasury of hummingbirds. Does...
Pittsburgh’s National Aviary takes you around the world...
“He’s close.” On the trail of a rare...
It’s a bird-eat-bird world: Pileated Woodpeckers on the...
Tree Swallows caught in midair: A rare glimpse...
What a show: Battle of the Hummingbirds reaches...
Can we save this globe-trotting sandpiper? Only if...
Taking off in a cloud, Snow Geese create...
Bird of the WeekBirding researchPhotography 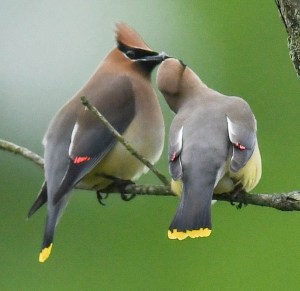 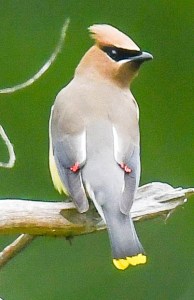 He looked away, just as she was glancing toward him. Then she looked away as if bored beyond belief. This went on for a few minutes. At one point, he stepped to an outer branch as if ready to part, then he jumped back beside her, a little closer than before. 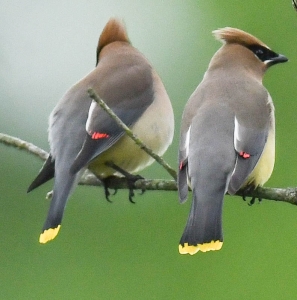 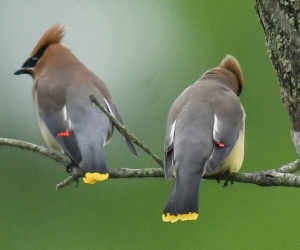 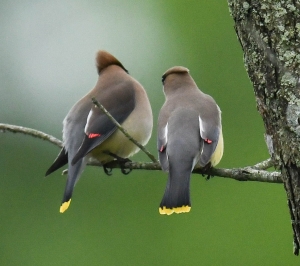 Then she opened her mouth. Who know’s what she had to say, but it got immediate results.

He sidled up and leaned in as if ready to plant a peck on her cheek. She was right there with him, closing in, beak to beak. Finally, he made his move: Out of somewhere he produced a tiny insect. She took him right up on it. What looked from a distance like a kiss was something equally intimate: A prized morsel of bug.

It’s likely this was more than a mere gift. Cedar Waxwings are known for sharing fruit, Rice said. Further, many birds will offer one another food during mating rituals to get attention and show what good breadwinners they would be. “That kind of clues her in to the fact that he can provide for young’uns,” said Rice.

Before long, the two Cedar Waxwings flew off, perhaps to continue the mating dance, perhaps to prepare to settle down for the nesting season.

Either way, they left us with a lesson we won’t forget: One species’ tasty bug is another’s flowers and chocolate.