In the weeks leading up to Saturday’s Global Big Day, the eBird team at the Cornell Lab noticed something they’d never seen before.

The eBird smartphone app that has become the standard for filing bird sightings was flooded with new users. That was followed by tens of thousands of fresh checklists and thousands of reports from back yards across North America. In parts of the world, eBird observations jumped as much as 2,000 percent between this April and last. 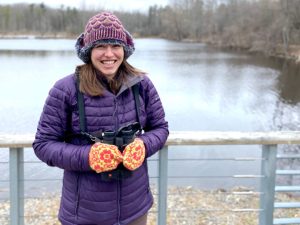 With much of the world at a near standstill from the coronavirus, it wasn’t surprising that people trapped at home would try birding to pass the time. But the dimensions of surge were so big, scientists guiding the project are hard at work to make sense of what they they’re seeing.

“We’re waiting kind of cautiously before we decide what we can really do with this,’’ said Jenna Curtis, eBird project co-leader at the Cornell Lab of Ornithology. “But it’s very exciting.’’

Pages from the eBird mobile app / Cornell Lab of Ornithology

The statistics tell one part of the story: eBird checklists, which birders file to Cornell based on the species they identify (by either seeing or hearing the bird), increased nearly 50 percent over a year ago. Some of the specific elements birders send in, such as bird audios and photos, saw similar or even greater increases.

As a result, sometime this month, Cornell says eBird will reach a whopping 800 million total observations on birds – for a sudden boomlet at the world’s largest citizen science effort.

The other part of the story is how the surge plays out for birds. It’s almost certain to be a good thing, but it will take some time to know exactly how.

Is the quarantine giving birth to a new wave of birders, or will interest fade when schools and stores reopen? Will the avalanche of data lead to new discoveries about species, particularly those closest to where people live? Will the jump in birders strengthen conservation and raise public support for protections?

Flying Lessons: One of the intriguing elements of the eBird surge is what it tells us about the relationship between birds and people. While we travel in separate orbits, we react to each other in a number of ways, such as how our activities influence bird songs, and the way people are turning to birds in a troubling time.

Cornell based its findings on about six weeks of data, including all of March when usage was more normal, and the first two weeks of April, when the dramatic increases took place. The eBird science team will be watching what happens as the stay-at-orders are eased and lifted, to track how the rest of this story unfolds.

They’ll also be watching to see if the unprecedented changes in human behavior around the world has a direct impact on birds. The songs of some birds change in relation to the noises around them. Many species avoid areas where crowds of people gather. 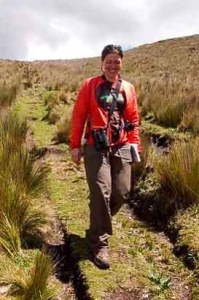 Jenna Curtis on a birding trip in Ecuador

“If people aren’t as loud, if we’re not making as much noise, birds may change their singing behavior,’’ she said. “They also may creep back into places less frequented by people, like parks and refuges.’’

The other change the eBird staff is tracking is what the rise in the number of checklists, many recorded in back yards and close to population areas, tells them about the distribution of birds. Traditionally, many checklists come from locations where people travel and territories known for their birds, including the nation’s coastlines and peak migration areas. For obvious reasons, eBird calls these places “hotspots.”

“I think we’ll need to take a step back and look at all of this,’’ she said.

The timing of the surge is good for a couple of reasons.

It’s happening as the spring migration approaches its peak. “This is an exciting time to be a birder,’’ said Curtis. “It’s the best time of year to learn.’’ 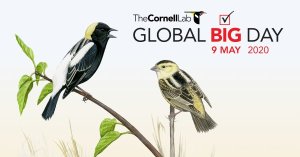 And this Saturday is the Global Big Day bird count, led by Cornell to promote birding around the world and take an annual snapshot of what participants are seeing.

They hope the thousands of new birders will join the count, which you can do by simply filing eBird checklists of what you’re seeing and sending it to Cornell. Here are instructions.

Curtis hastens to add that participants should be careful to follow pandemic guidelines. The emphasis isn’t on the number of birds you count; it’s about the number of checklists submitted. The record, set two years ago, was 94,600 checklists. This year’s goal is 100,000.

“We think we stand a good chance of breaking the record,’’ Curtis said. “We do want people to do what is comfortable and smart and responsible for them. How many species you see doesn’t matter. It’s about the checklists. It’s about appreciating the birds around you.’’ The top of the eBird web page where the lab will track the number of checklists on Saturday.

The transformation in bird research may hold the key