The decades-long push to save the Florida Grasshopper Sparrow, which was on course to be the next bird to go extinct in the U.S., got its first hopeful news in years this week: An experiment to restore the sparrow population with captive-bred birds has produced its first fledglings in the wild. 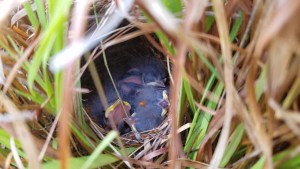 More than a dozen chicks and fledglings, along with eggs in a number of nests, have been spotted in the grasslands south of Orland where a coalition of agencies is staging a last-ditch rescue mission. “We’re very excited,” said Juan Oteyza, the state biologist who oversees the project. “It’s not only working, but it’s working well.”

The Florida Grasshopper Sparrow’s population dropped to just 30 breeding pairs in the four Central Florida locations where the last of the species lives. That prompted an ambitious campaign to start breeding captive sparrows to release into the wild. Among the questions that loomed over the effort was whether the birds would have the innate abilities to survive and whether they would be capable of breeding and raising a new generation of sparrows. For weeks, researchers have been watching the stretch of Florida prairie where about 150 of the sparrows were released last year and this spring. The birds are tagged with a set of bands that identify them, so the staffers can track every one of the individual birds that hold the key to the species’ future.

The birds, most of them about a year old, began to match up with mates, some with wild sparrows and some with other captive-bred birds. Researchers could tell from their songs that the birds had started mating. Then they began to find nests with eggs in them. The first six or so fledglings are now beginning to leave the nests and head out on their own, said Oteyza, a research scientist with the Florida Fish and Wildlife Research Institute.

Our story on the arduous path leading up to the release of the sparrows appeared two weeks ago in The Washington Post (and here’s a companion piece on the unique nature of the project that ran on Flying Lessons.). The effort is part of a number of scientific interventions around the world to stave off precipitous declines in various species. The sparrow, though a small, nondescript bird without much star power, is a symbol of the unique Florida grasslands.

This isn’t the first captive-bred experiment in the U.S., but the sparrow’s declines has made it a difficult case that scientists admit they still don’t fully understand.

One of the captive-bred Florida Grasshopper Sparrows left its carrying case during a release of the birds this spring. Photos by Anders Gyllenhaal

The arrival of the young sparrows gives them hope they’ve found a way to save the species. “It shows that these birds are capable of doing everything they need to do without being taught as a wild bird,” said Oteyza. “The number of birds now established in the population is better than our goal.”

Researchers won’t know the total number of young sparrows born as part of the project until the breeding season comes to a close in late July or early August. While the researchers take many steps to protect the birds — raising nests to avoid flooding, encircling them with fences to keep out predators — it’s still a treacherous time for young birds. Many are likely to perish.

Sarah Biesemier (left) and Juan Oteyza, state biologists who oversee the project, carried a case of captive-bred sparrows to the release earlier this spring.

“While we don’t yet know how many captive birds are breeding, or how their chicks will fare, we’ve reached a remarkable milestone in the sparrow’s recovery,” said Andrew Walker, CEO of the nonprofit Fish & Wildlife Foundation of Florida, which is helping fund the sparrow program. “It shows what good science and consistent financial support can accomplish.”

The birth of chicks helps put aside worries about whether bacteria that had killed some of the captive-bred birds early in the experiment might still be lurking in the species. At one point, some of the partners in the project pushed for a halt to the breeding to study whether the deaths might be related to the overall decline of the species. In the end, the coalition decided too much was at stake to slow down the pace and breeding continued at the White Oak Conservation Center in far North Florida where the breeding is taking place. “The successful nesting of released birds from White Oak validates our methodology and reinforces our effort to produce more birds for release,” said Andrew Schumann, White Oak’s animal collections manager. “We recognize there is a long road ahead, and there will be unknown setbacks in the future.  Today this collaborative conservation initiative has galvanized our determination to save the Florida grasshopper sparrow, and sets the stage for future species recovery projects.”

The rescue mission plans to breed captive birds until the population has stabilized. The Fish & Wildlife Foundation just announced a fresh $140,000 grant to the sparrow mission. “There’s still a lot of work to be done,” Oteyza said.

About two thirds of the captive-bred sparrows are male, like the one shown here, and a third female. In the early cases, captive birds have paired up with wild birds as well as with other captive birds. The matches means scientists will get to see how different combinations of mates work in the wild.