Let’s say you started birding in the pandemic, bought binoculars, and now you’re hooked. You can identify the songbirds and woodpeckers in your neighborhood. So what happens next? 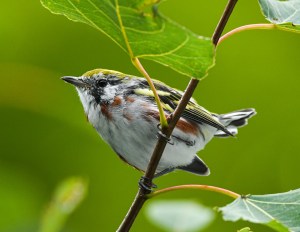 A Chestnut-sided Warbler we found in Massachusetts this summer. Photos by Anders Gyllenhaal

I’ve been thinking a lot about that question while hiking through an Audubon sanctuary in western Massachusetts, peering through bushes looking for fist-sized birds that have no interest in being seen.

Time is of the essence.  The American Redstarts, Chestnut-sided Warblers, the Black-and-Whites, the Yellow Warblers and all the other varieties that spend the summer here will start migrating south any day.

Not that long ago, I didn’t know a warbler from a sparrow. So exactly what does it take to become a good birder? Once you’ve moved past the cardinals, blue jays and robins, what’s keeping you from finding the Indigo Bunting or a Rose-breasted Grosbeak? 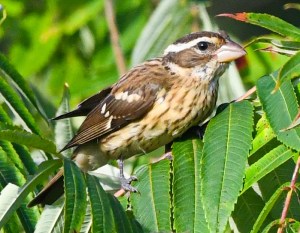 Becoming a birder is a process, and it could go any number of ways. Some of it depends on your personality,  how much time you have and how mobile you are. Do you like to collect things? Do you crave the thrill of the hunt? What’s your frustration tolerance?

Let’s say you’ve spotted a bird you can’t identify. Would you rather use a book to compare diagnostic markings such as eye rings and the color of a bird’s bill and feet? Or would you prefer a phone app designed to help you identify the bird easily and instantly. Perhaps you’d want a fellow human who can guide your way.

My path to becoming a better birder included all of these things. Obviously birding has been fun and interesting, but it’s also been really hard, and at times, really, really frustrating. 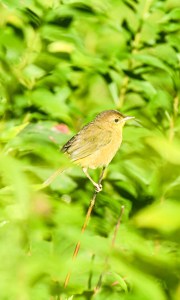 The challenges of identifying birds is illustrated by this female Common Yellowthroat, one of many yellow warblers that look similar.

But did it have to be? My biggest frustration  comes from all the details that should be obvious, but they aren’t obvious at all.

Take the Fall Migration. A few years in, Anders and I found mention in a guidebook that birds by the thousands would pile up at the tip of the Eastern Shore of Virginia every fall to fatten up on their way south. Come mid-September, off we went. We drove through the wildlife refuges with nary a flock in sight. Maybe we had the wrong refuge, so we went to the visitor’s center for advice.

“Oh yes, they’ll be here by the thousands,” the lone desk attendant said. “Just not yet.”

Almost a decade ago, Anders and I started birding by accident as a way to escape the city. Then we created Flying Lessons as a place to store his photos so we could share them with family and friends. We never thought this would become an obsession, an ecological mission and a bundle of life lessons learned from nature.

Like many folks, I enjoy sharing my passions. I want to make things easier and better, and I hope to inspire you to keep striving toward the next level on this birding journey. So I’m starting a section of Flying Lessons on Birding Basics — some lessons for beginners and some for advanced-beginners. 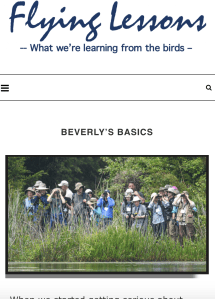 Much of my career involved writing cookbooks, and so I tend to think in terms of how to do stuff in logical steps guaranteed to produce successful results.

Of course there isn’t just one recipe for moving from beginner to advanced-beginner and beyond. But there are some predictable scenarios as you start out. Just name a beginner’s birding situation and chances are I’ve got tips and observations to share. If I don’t know, I’ll try to find out.

The plan is to assemble my “recipes” in a section called Beverly’s Basics. I’ve gotten started by posting a three-part series on binoculars, (here’s the opener), and a blog about birding by ear that will give you an idea of what’s to come. (That was one of the top stories of the summer for Flying Lessons, convincing us there’s an interest in such basics.) 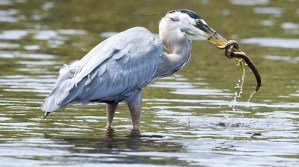 There will be some snakes along with the birds. A Great Blue Heron wrestles with a snake in North Florida’s Merritt Island National Wildlife Refuge.

My guess on what’s to come for you as a birder is a heap of fun, an evolving curiosity and self-confidence, a few potentially embarrassing mistakes, (here’s a post confessing to some of mine), and the risk of some unpleasant situations. I’m not a fan of snakes, sudden rainstorms and swarming gnats, but they’re out there, too.

Most of all, I hope you’ll have priceless moments of nature-induced awe that will sooth the soul and add spice to life with flavors you never expected to taste.

I want an instant app. My books to identify birds hardly ever have the birds I see (and don’t already know the type).

The two apps that are best are ebird and merlin, both by Cornell and free. To see the birds around you, though, you have fill out where you are. You can find some guidance on beverly’s birding basics.