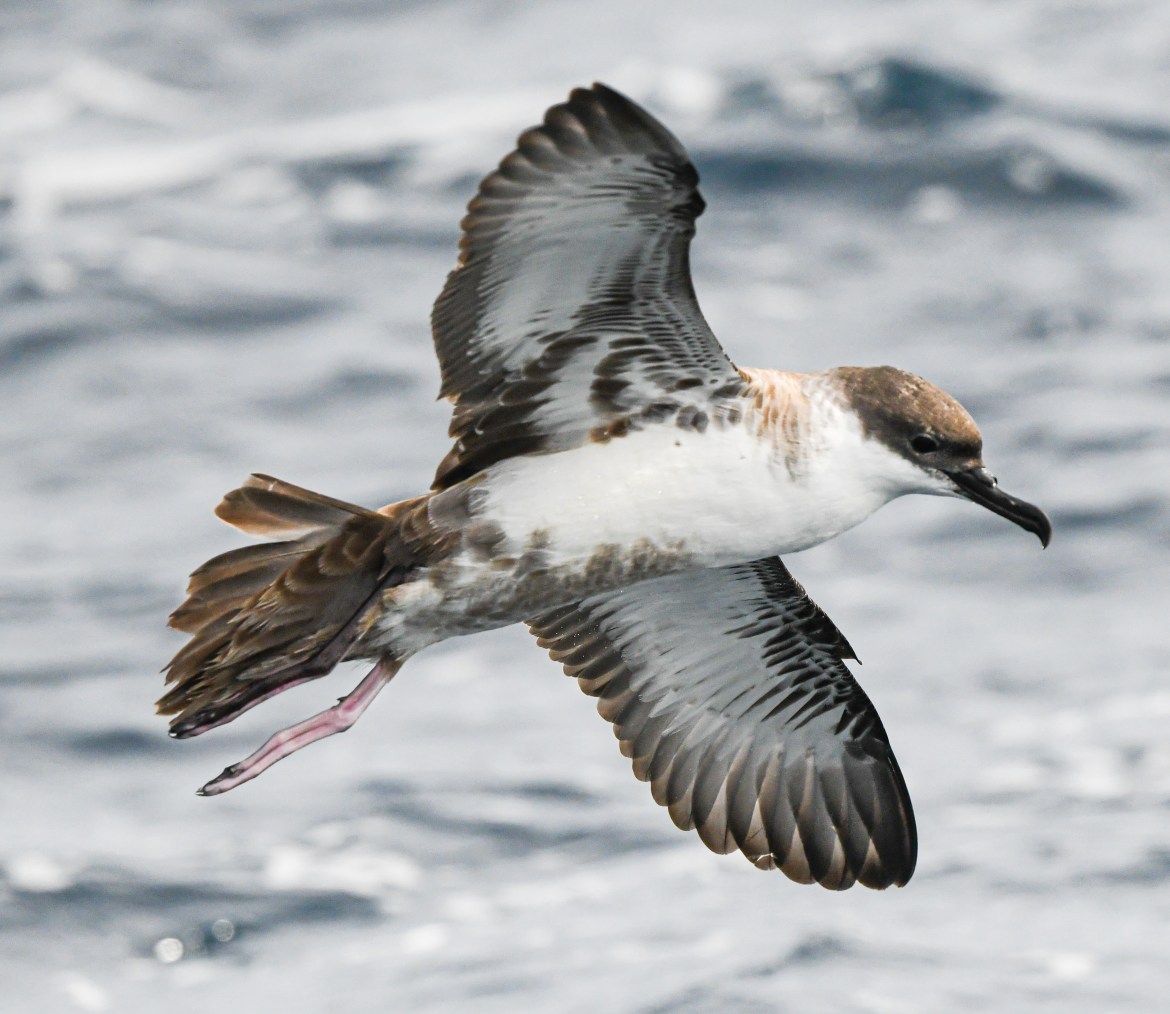 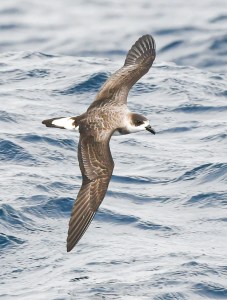 A Black-capped Petrel shoots along the surface. The bird above is a Great Shearwater. Photos by Anders Gyllenhaal

The first Black-capped Petrel appeared nearly two hours into the trip, well off the bow of the boat, zipping along the ocean’s surface like a missile. It was mostly a blur, but it gave us a taste of what was to come.

Petrels are in the seabird family, which includes some of the most impressive and endangered species on Earth. They live their lives on the open sea, weathering the harshest elements, flying hundreds of miles at a time, feeding on fish and coming to shore only to breed.

Seabirds won’t come to you. If you want to see petrels, shearwaters, skuas and jaegers, you have to go to them.

The best place to do that is off the coast of North Carolina, where the islands that make up the Outer Banks jut far out into the ocean. Here, the warm Gulf Stream that attracts seabirds comes close enough to reach in a long day’s boat trip.

We set off before dawn on this clear Saturday in mid-October aboard the Stormy Petrel II, a 61-foot fishing boat piloted by Brian Patteson. The bird-obsessed captain has done as much good for seabirds along the Atlantic Coast as anyone. Every year, he makes 40 to 50 trips to the Gulf Stream, ferrying hundreds of birders out to sea for a precious look at the birds collectively called “pelagics.” 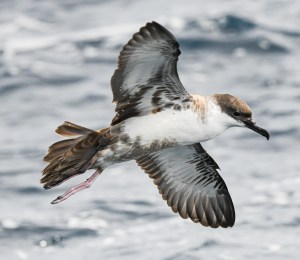 On every trip, Patteson and his crew count the birds and submit their data to Cornell Lab of Ornithology’s eBird list, which helps scientists track the health of the species. Patteson and his assistant, Kate Sutherland, also compile their own data over time to help them analyze how the pelagic populations are faring in the long run. 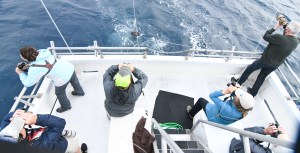 Passengers watch birds from the stern.

You’ll find all the details on lining up a trip at the end of this post.

Our first seabirds of the day appeared as we moved into the Gulf Stream. That’s where the ocean changes color to a translucent dark blue and where the Continental shelf falls off from the shallows of the coast. This phenomenon produces the nutrient-rich water full of fish and squid the seabirds live on. 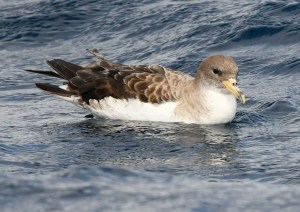 Right on cue, we went from occasional glimpses to entire flocks. When we finally reached the edge of the Continental shelf about 30 miles offshore, where the depth falls off to as much as 6,000 feet, whole flocks of mostly shearwaters and petrels covered the surface of the ocean in places. (On the fall trips there are fewer species of birds but larger flocks. In the spring, birders are likely to see a broader range of pelagics but fewer individuals — species such as skuas, jaegers, phalaropes, the occasional booby, and some eight types of petrels.)

Here’s a gallery of a mix of seabirds (run cursor over photo for identifications): 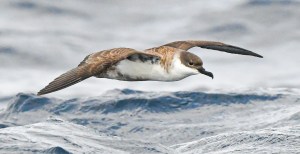 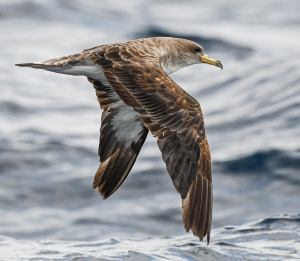 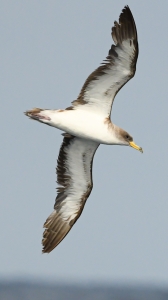 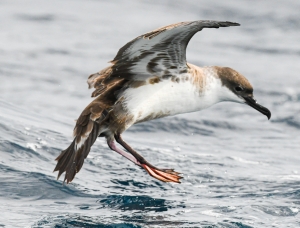 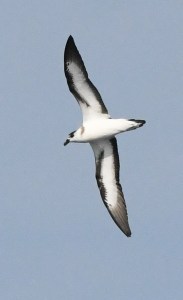 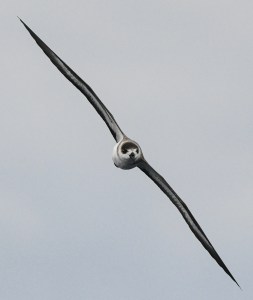 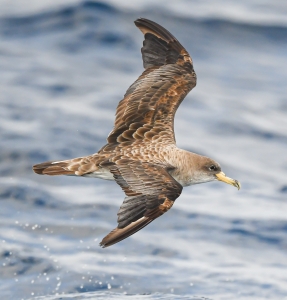 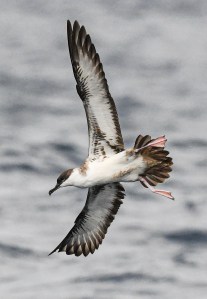 The birds take off from the water with their legs peddling furiously, as if they’re running on the surface. Once in the air, they turn into acrobats, rising and falling with the wind, swooping down to snag food from the surface. Mostly a blurry black and white from a distance, their plumage is actually a complex weave of patterns and colors.

A Great Shearwater launches off the surface.

These are sights that draw bird lovers from all over the country as well as overseas. Though the birds are wary of the boat and the two dozen humans aboard, they are so busy patrolling the ocean that they put up with the intrusion.

A chum line off the stern attracts birds.

Once we approach a flock, Sutherland pours a stream of fish oil behind the boat and scatters bits of food on the surface by releasing ropes attached to wire baskets full of chopped fish. This is called a chum line, and these tasty morsels coax the birds even closer as the boat lumbers slowly through the water.

Patteson looks the part of the proverbial bearded sea captain with his deep tan and quiet intensity. Patteson has been chasing birds since he was a teenager, and even at 52, he’s still just as fascinated. When we found ourselves in the midst of flocks, he’d turn the helm over to a crew hand and, like the rest of us, chase around the boat for close views and sharp photos. 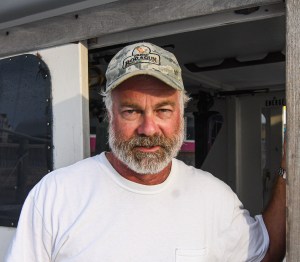 “It’s pretty amazing when you compare them to land birds,’’ he said later. “When you think about what they have to go through, the weather they have to deal with at sea. These birds live a long time in a pretty hostile environment.’’

While the birds can indeed live decades, part of what’s drawing attention to them is that they’re gradually disappearing.

Ocean water quality is deteriorating, while the Caribbean islands where seabirds migrate for breeding are being carved up for housing, farms and timber harvesting. These threats have helped make seabird species the most threatened groups of birds in the world.

The Black-capped Petrel is one of the most endangered of them all. Thought to be extinct until it was rediscovered in 1963, an estimated 1,000 pairs remain today. They are spread along the Atlantic coast, and in breeding season, on hidden nesting sites in the mountains of Haiti and the Dominican Republic.

“I’m not seeing the parade of Black-capped Petrels that I used to see,’’ Patteson said. “They’ve definitely declined.” 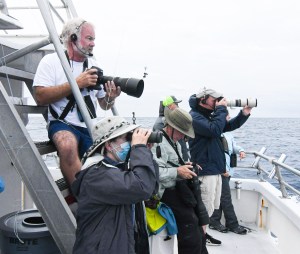 Patteson (top) and his passengers pull out their telephoto lenses.

Unlike troubled species on land, seabirds are difficult to research beyond simply counting individuals. It’s hard just to see them, much less conduct the kind of closeup study researchers are doing with other birds.

A group of organizations and agencies, including the American Bird Conservancy and the U.S. Geological Survey, have started a study of the Black-capped Petrel. They’ve attached tracking devices, (with the help of Patteson and his crew), and are trying to learn about their breeding routines.

Still, the work is in the early stages. “There’s a lot we don’t know,’’ Patteson said.

A Great Shearwater (left) and petrel fly in formation. 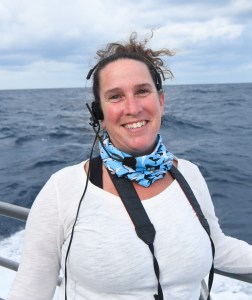 The one thing they do know is that public support for protecting birds is one of the keys to saving them. That support isn’t easy to generate for birds that people don’t see. In that sense, the sea-birding trips are one of the best things that can be done for the pelagic species.

Here’s what you need to know about going on a pelagic trip from Hatteras:

The website for Captain Patteson’s company, called Seabirding, is detailed, incredibly helpful and mandatory reading. (You’re embarking on a true adventure at sea, taking off from the far edge of a relatively remote island. Start reading all of the articles and instructions well ahead of time!)

If you want to go, reserve a spot on the boat months in advance. Only 25 spots are normally available for spring trips – and just 14 spots with COVID-19 restrictions. Due to the pandemic’s forced cancellations last spring, those passengers are now first in line for future trips. You can sign up for notifications here for an announcement of the 2021 schedule.

Cost is $177 per person, and you can request a reservation on the website. You’ll get an email letting you know if space is available, and then payment is accepted online via credit card or by a mailed check.

The spring and summer trips are just one-day commitments, but winter and fall reservations are a two-day commitment. If weather conditions aren’t safe for sea travel the first day, the trip goes the following day. If both days are a no-go, you get a full refund.

Plan to arrive for the trip the day before to meet the boat at dawn, having already eaten a hearty breakfast to forestall seasickness. The closest major airports are in Norfolk, Va., a 3 ½-hour drive, and in Raleigh, N.C., a 4 ½-hour drive. The Seabirding website lists multiple lodging options.

A final bit of advice: While whales and other marine life are sometimes spotted, this is a trip catering specifically to people who are intensely interested in birds. Think hard before inviting friends or family members who don’t fit this profile. Dogs are not allowed.

A fascinating glimpse into a rare part of the animal kingdom — thank you!

Thanks for taking us all with you on your trip here, Anders and Bev!

Thanks for your note. Hope all is well your way.