Around the world, all sorts of efforts are in the works to protect the many bird species now in decline. This week, in an article for the Washington Post, we take a deep look at one of them: the Cornell Lab of Ornithology’s eBird project and its innovative way of researching the daily life of birds.

We hope you’ll take a look at our piece, which you can find here online and is the cover story of the Post’s Health and Science section on Tuesday. 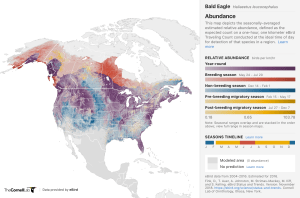 The eBird project stands out in several fascinating ways: it’s now the world’s most successful citizen science effort. The project is also the scientific foundation for numerous studies on the status of modern birds, and it’s helping reshape how conservation is conducted. This is is a big part of what our Post story explores.

What’s most interesting to us is how the technology behind eBird does all of this as it’s become a valuable tool to help individuals identify the birds they see and keep track of their own birding lists. At last count, 462,000 people around the world are using the eBird app.