My piece in The Herald brings home the fact that these troubles are collecting before the impacts of climate change fully register. It’s clear they are on their way, which is why scientists at all the major avian organizations are working together to assess what’s likely to happen and what can be done.

The story looks at what enables some birds to adapt to changes, while others cannot. Birds that have wider diets, that can move more easily to new locations and that have greater range for finding food are better positioned to stay healthy.

Those that have to migrate long distances — and thus rely on a series of habitats for their journeys — are likely to be thrown off by changing climates. Also threatened are those that rely on insects or live on the ocean, where pollution and altering water conditions are creating hazards. 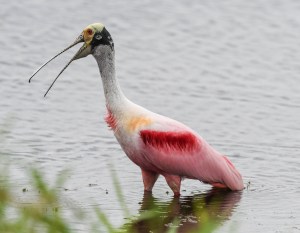 A Spoonbill forages for food in the T.M. Goodwin Wildlife Management Area near Melbourne, Florida. The Spoonbill’s awkward frame dates back to its dinosaur origins.

Much of this is mere supposition, according to scientists and researchers I interviewed for The Herald article. One of the most troubling ideas they shared is how little is known about what climate change will mean for birds. They stressed there are lots of things that can done to blunt its impact, but too much of our energy is spent arguing over the threats, what to do about it and who will do what.

“Climate change is a big scary thing,” ’ said Mike Parr, head of the American Bird Conservancy that has created bird preserves all over the hemisphere. “People feel disempowered by it. They feel like you can’t fix it. There’a a fatalistic feeling about it. I don’t agree with that. We already know many of the things we can do. We should be acting on them, slowing it and mitigating it.”

We hope you’ll send time with The Herald article, which is posted online here  and is scheduled to run in the print edition on Sunday. Meanwhile, here’s a gallery of photos drawn from our time researching the Spoonbills package: