Paying respects to an under-appreciated bird: Yellow-rumped Warbler is a survivor 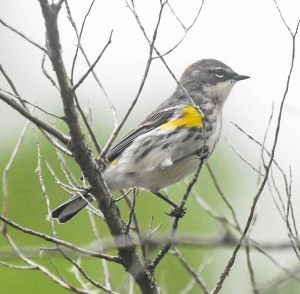 Of the 55 species in North America, the Yellow-rumped is probably the most abundant Warbler. It shows up all over the country at some point during the year and winters much farther north than most other Warblers do.

While the Yellow-rumped Warbler should be admired for its hardiness, adaptability and tenacity, it’s often under-appreciated in serious birding circles. Anders and I see so many that we just call them “Rumps” – as in, “Darn. It’s just a Rump.”

In an era of profound worry about habitat loss, climate change and the other perils so many birds face, we should be celebrating the only Warbler that’s able to digest the wax in bayberry fruit.

The ability to switch from eating insects to bayberries is key to the business of winter survival and allows Yellow-rumps to spend cold months in coastal areas as far north as Nova Scotia. Not having to migrate so far to find food contributes to the bird’s overall proliferation. 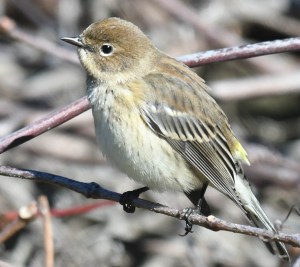 Some estimates put their total population as high as 130 million — a huge number no matter what you’re counting.

Fellow birders often complain that once the Rumps arrive, it’s a sign that all the other Warblers are gone. We don’t know if that’s true, but we’ve also been guilty of disparaging this dependable little bird over the years. 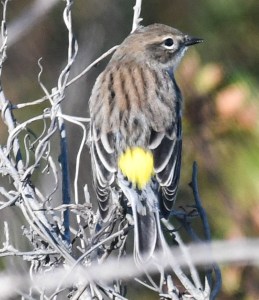 How quickly we forget that the Yellow-rumped Warbler was the first tiny songbird we were able to identify. Just watch for a few seconds and you’ll see the bright yellow patch right above its tail. It’s nearly day-glow and completely unmistakable.

We’re out on the birding trail after a three-month break, and here in Florida we’re once again watching the Rumps flit from tree to tree. Perhaps it’s this fresh perspective that’s reminded me of how spiffy these Warblers really are.

Or perhaps as a way to atone for past sins, I’ve declared the humble “Rump” our Bird of the Week.

Birds For Beginners: They gotta stay still and be big enough to shoot