Birding from the Flying Cloud: Aboard an Airstream, you’re already there.

Our birding base is an Airstream Flying Cloud. It’s what makes it possible to pursue this passion on our own terms. Forget waking up and driving to the woods to catch the dawn’s birdsong. We’re already there. 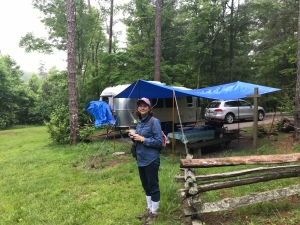 A campsite just outside Asheville, N.C.

On move day, here’s the routine: Pour coffee into a Stanley thermos, pull up stakes, crank up the truck and hit the road in search of the next scenic campground. The Flying Cloud follows along like a satisfied puppy on a leash.

We’ve situated ourselves beside a brook in the Virginia mountains where Louisiana Water Thrushes hopped from rock to rock. Goldfinches bathed farther upstream. 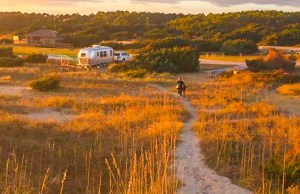 The scene on Ocracoke camping amid the sand dunes

One August afternoon we parked 10 yards from a lake on a rocky peninsula in New Hampshire. Before we could unload the chairs, we’d already noticed Brown Creepers scaling the surrounding pine trunks. (Another new bird for my Life List!)

Just beyond a primal sand dune on

Ocracoke Island in Cape Hatteras National Seashore, Anders got photos of a Great Egret walking through a puddle near the bathhouse. (Cold showers only at Ocracoke, so hooray for the Airstream’s propane water heater.)

All of this splendor can be had for an average of $30 a night. You don’t get room service, but the camping life offers other perks. Anders wakes me up with a cup of coffee, and he often builds a campfire before a breakfast outdoors. No overpriced buffet, but even oatmeal tastes terrific with a touch of wafting wood smoke.

Camping beside a rushing stream in Southern New Hampshire

Urban life can be surprisingly accessible, too. One of our favorite parks sits on a reservoir lake 20 minutes outside downtown Nashville. This past October a flock of migrating Rose-breasted Grosbeaks took over a tree smack dab in the middle of our campsite – a bird I’d spent the summer hiking through miles of forest searching for in vain. 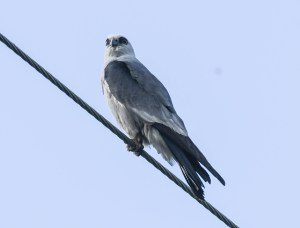 In Bayou Segnette State Park in New Orleans, 20 minutes from Bourbon Street, we spotted our first Mississippi Kite on an electric line overhead. I was a bit freaked out when we backed the trailer into our campsite and saw a “Don’t Feed the Alligators” sign posted beside the picnic table. We never actually saw an alligator in our four days there, but fear and loathing did take away from the experience.

It’s true that the flip side of this itinerant lifestyle is not without stresses and strains. For example, the journey to Ocracoke included a stunning voyage on a ferry linking Swan Quarter, North Carolina, to the barrier island beyond. Our ferry reservation was for 5 p.m.

We nearly made it.

After a tense trek through 30 miles of wilderness in Lake Mattamuskeet National Wildlife Refuge to reach the port, we arrived just in time to watch the last ferry pull away from the dock.

There was no cellphone service, no campground, no restaurant, a dab of gas in our tank, and no gas station. A sympathetic ranger handed us a ticket for the next day’s 8 a.m. ferry, then shook his head and confirmed my worst fears. Swan Quarter is a dot on the map at the end of the Earth. Here, “the middle of nowhere” is not an offhand expression.

“Look on the bright side,” my husband said. We’d landed in a moment of Airstream lore — and to him, nothing could be more enticing. For many owners of a “Silver Bullet,” finding yourself in the middle of nowhere is what the Airstream mystique is all about. 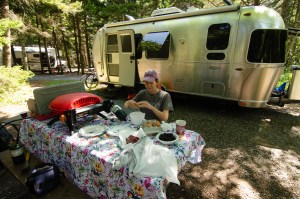 And it’s no myth. Experienced Airstreamers take great pride in the trailer’s ability to “boondock,” or be self-sufficient in the most primitive conditions imaginable. You could pull into a cow pasture or land in the desert and be perfectly fine for a week. Longer if you know what you’re doing. But at that point we’d only owned our trailer for five days.

Finding a place to boondock after dark is not for sissies. Meaning me. My preferred version of camping is called “glamping,” and it doesn’t look anything like this. I was very close to tears.

But Anders was right. He’d remembered passing a shabby trailer park a few miles back near the Mattamuskeet Wildife Refuge. Never mind that the first camper door we knocked on belonged to an obviously inebriated fellow who said the park didn’t have an office, but he’d be glad to make a few calls. 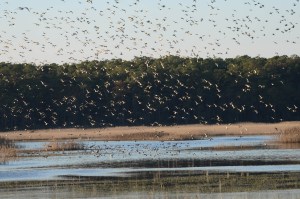 The sky was full of ducks first thing in the morning at Lake Mattamuskeet.

Turns out the campground was a weekend hangout for duck hunters who took great delight in helping us set up for the night and touring through our still-pristine Airstream. They recommended a nearby restaurant and said if we hurried, we could get to the only gas station in the vicinity before it closed.

But their best advice of all? Instructions to be at a certain road inside the Mattamuskeet refuge the next morning no later than 6 a.m.  There, astonishing clouds of migrating ducks and White Ibis obscured the sunrise.

The sun setting behind an Airstream campsite

Several hours later, safely aboard the ferry with cups of coffee brewed on the Airstream’s propane stove, the previous night’s predicament felt not so much like a nightmare, but the fulfillment of our dream for adventure. It’s why we bought an Airstream in the first place. 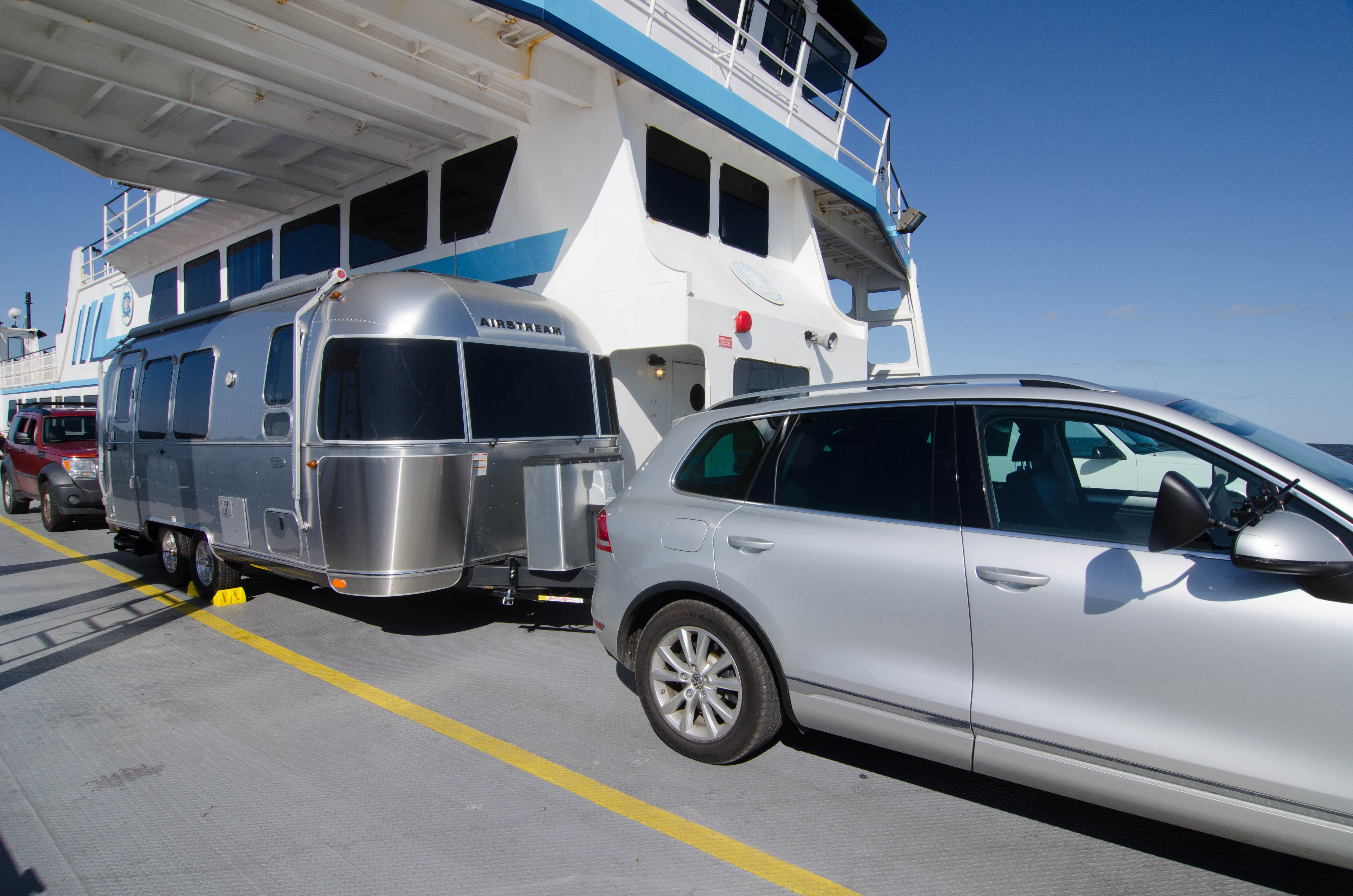 We made the Ocracoke ferry the second time around.