The fact that the park belongs to a co-op of Airstream owners was equally intriguing.

I joke that living in an Airstream is like being part of a cult, but it’s not far from the truth. It’s like everyone has the same breed of dog or 3-year-olds at the same school. There’s an instant bond as you compare notes on models, maintenance and tips on living in a compact, aluminum bubble. 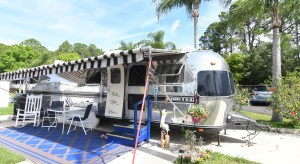 One of the most elegant classics was this restored 34-foot limited edition owned by Eldon Wideman and his wife from Toronto. 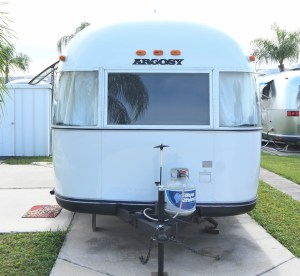 This all-white Argosy, a painted and rare 1970s cousin of the Airstream, was a few neighbors away.

The Airstream company estimates 60 to 70 percent of all its trailers ever made are still in use. Some 300 of them were our neighbors in Melbourne – restored antique models from the 50s and 60s, oversized behemoths from the 70s and 80s and a few prestigious limited editions.

These sausage-shaped trailers date back to 1931 when Wally Byam built the first Airstream so his wife would go camping. She refused to sleep on the ground, and Wally was a wise and resourceful man. 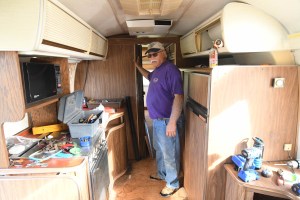 Over the decades after World War II, Airstream trailers gradually became etched in the American imagination. The “silver bullets” quarantined the first astronauts returning from the moon, housed actors on movie sets, and hosted caravans of intrepid campers through China, India, Egypt and other photogenic spots around the world. (The trailers arrived at each starting location via cargo ship.)

At Land Yacht Harbor, we met a couple whose 27-foot Airstream was one of only 100 manufactured to commemorate the 100th anniversary of the National Park Service. The interior looks like a rustic lodge with dark wood floors, etched maps on the walls pinpointing the national parks, and custom-designed Pendelton plaid upholstery.

A small army of Airstreams at the entrance to the park.

Another newly retired couple sold their house to live in an Airstream full time. They had just finished a birding “Big Year.” That’s what it’s called when you undertake a fast-paced quest across North America to see how many species you can tally up in twelve months time. We were equal parts envious and horrified by the idea of giving up everything for a nonstop life of birds and campgrounds. 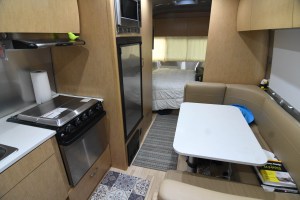 Here’s a view of the inside of our Airstream, a 23-foot Flying Cloud. It’s unusually neat because we were getting ready to pull out.

All in all, Anders and I were delighted with our time in Florida. We saw 112 species and logged some Life List firsts, including the Florida Scrub-Jay, Crested Caracara and Purple Gallinule. You can find posts about our adventures and see Anders’s photos here on Flying Lessons. There’s a video from our day with Wood Stork hatchings, a close-up visit with a pair of Red Bellied Woodpeckers building their nest, and a patience-building encounter with a Red-shouldered hawk. You can also see lots more photos on our Flying Lessons Facebook Page, or on Twitter @FlyingLessons, and on Instagram at Anders Gyllenhaal.

Though we’re thinking of a more ambitious trip out west next winter, we hope there’s another interlude at Land Yacht Harbor in our future. There’s a lot to be said for the life of a Snowbird. 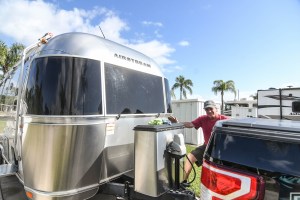 Anders hooking up the Airstream for the journey home last week.

Heading West: A long-awaited trip gets started at...

Birding from the Flying Cloud: Aboard an Airstream,...

Can you still be Valentines living in an...

love this…even made me more curious as to how to live in such close proximity…with your spouse.

I once had a 1979 Argosy. Never took it anywhere. Started to restore it. The fuel tank cracked. Packrats may have eaten some of the electrical. Finally sold it.