Tree Swallows caught in midair: A rare glimpse...
Cedar Waxwings are dining their way north: Don’t...
Tanagers are one big, beautiful family of birds....
They unlock the Earth’s treasury of hummingbirds. Does...
Pittsburgh’s National Aviary takes you around the world...
“He’s close.” On the trail of a rare...
It’s a bird-eat-bird world: Pileated Woodpeckers on the...
Tree Swallows caught in midair: A rare glimpse...
What a show: Battle of the Hummingbirds reaches...
Can we save this globe-trotting sandpiper? Only if...
Bird of the WeekBirdingFeatured

A birder walks into a clearing, and there’s a Song Sparrow singing its heart out. In chimes a Robin, followed by a Grosbeak and a Tanager, a Wood Thrush and a Warbler, all chirping at the same time.

Sounds like a bunch of songbirds out having a party. But it’s only the Northern Mockingbird. He is the party. 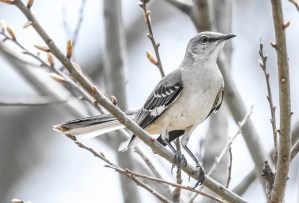 This could be the start of a great joke, but it’s just too infuriating. So many times it sounds like you’ve hit the birding jackpot only to be fooled by one wily, nondescript, gray-and-white bird.

It’s awful having your dopamine high dashed like that, and it’s happened more times than I care to count. Over the years I’ve come to seriously resent this bird.

So. The Mockingbird is a “mimic” – a type of bird who’s remarkable for his ability to imitate the songs of other birds. The male can have a repertoire of more than 150 songs, and he continues to learn new ones throughout his life. He even mimics the sounds of insects, animals and things that aren’t alive. Machinery for example. Researchers have identified Mockingbirds with 203 imitations.

The Mockingbird may sound like the life of the party but there’s a serious side to its music. Males with the most songs and the greatest stamina are the first to find a mate. 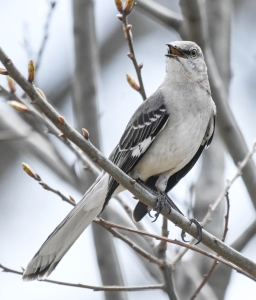 About half an hour before sunrise on a typical spring or summer morning, the Mockingbird situates himself at the top of a high, lone tree and belts out every song he can think of. It’s programmed into his DNA, and shame on the soul who can’t appreciate the symphony.

At the Cape May Birding Festival last week, I got a different perspective on Mockingbirds during a guided walk with Kevin Karlson, a veteran nature photographer and birding expert who’s co-authored numerous birding field guides. Nearly everyone in the group had traveled across several states to the southern point of New Jersey for one of the best birding events in the country. Karlson was talking about his approach to bird identification, and we were hanging on his every word.

Then out of nowhere and a little off topic, Karlson posed this question: “What’s your favorite bird?” 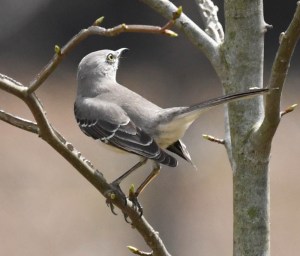 A few people spoke up, naming exotic species such as the Roseate Spoonbill and stunners like the Pileated Woodpecker.

Not one person in the group said a word. This from a guy who’s chased birds all over the world?

Karlson grinned. He knew we’d all be surprised.

And there it was: A lesson for people like me willing to go to great lengths in search of yet another amazing bird.

He’s sitting atop that tree! Right in front of me! Singing all the songs I should ever need to hear! 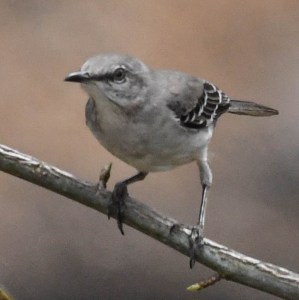 He’s a party animal, out to impress the women.

He’s a lovesick crooner, sacrificing everything to find the right mate.

Maybe I could grow to love him, but deep down, a part of me will always prefer an original composer.

However, next time I happen upon a Mockingbird out doing his thing, I do intend to take a moment to enjoy the party. And if I listen hard enough and concentrate on the gift right in front of me, maybe then I won’t be so easily fooled.

Here’s a gallery of Mockingbirds, singing, flying, dining and sitting at the top of the tree working on its repertoire: 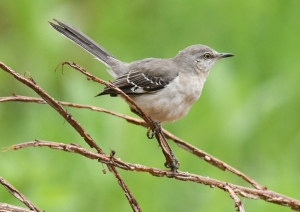 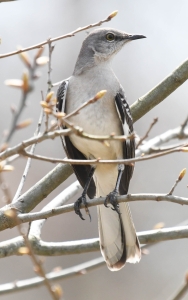 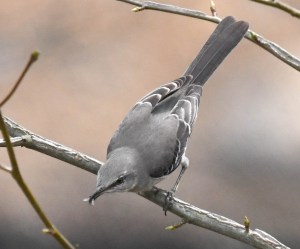 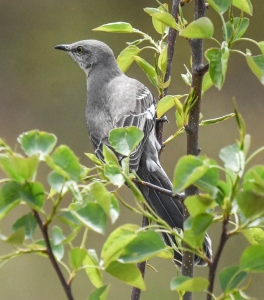 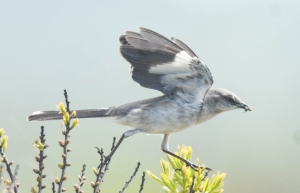 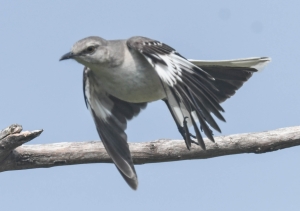 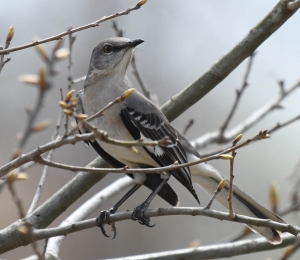 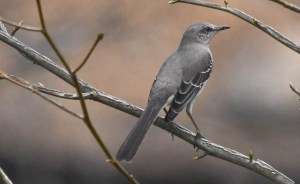 Love is in the Air: As the migration slows, the woods are heating up