“This isn’t only a bird crisis. The birds are just the messenger.”

John Fitzpatrick, director of the Cornell Lab of Ornithology, has spent his career talking about why people should care about birds. 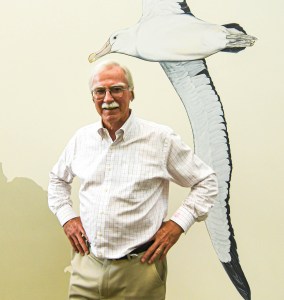 This fall, that argument has shifted to include a tougher, more compelling question: Why should people care that a quarter of the bird population has been lost in the past 50 years?

Fitzpatrick is one of the world’s leading voices on behalf of birds and a visionary researcher whose career roughly spans that half century of declines.

“The question of why people should care is so important,’’ he says. “The answer is a series of things, on a number of different levels.’’

He starts with the power and beauty of birds and our relationship with them. “Birds are not an optional lifestyle for us,’’ he says. “They sing to us emotionally, spiritually. They appear in poetry from 2,000 years ago. They are part of our fabric.’’

Birds also serve as a kind of messenger from the front lines of the environment we all rely upon, he says. 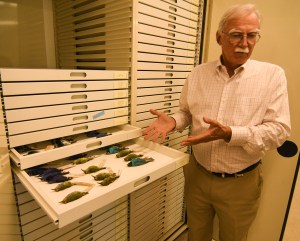 Fitzpatrick with some of the lab’s specimens.

The news that about 3 billion birds have been lost from the overall population came in a major study published in the journal Science three weeks ago. Cornell joined with the American Bird Conservancy, the Smithsonian, Audubon and Georgetown University to assemble the most comprehensive look at North American bird populations ever conducted.

The news was not a surprise, since the declines in the overall volume of birds have been the subject of many studies. They are obvious to anyone watching birds over time. But the dimensions of the losses were shocking, as was the discovery they are occurring not just with endangered birds but across almost all species, including such common birds as Cardinals and Blue Jays.

In the wake of the study, Cornell, Audubon and the American Bird Conservancy have been wrestling with how to respond. The way Fitzpatrick sees it, it’s time to recognize that the role that birds play goes deeper than we may think. 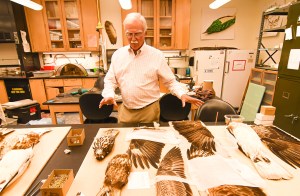 Fitzpatrick looks over the specimens in the lab.

“The changes that the birds are signaling has a lot to say about the health of the communities we live in,’’ he says. “When we see that they’re actually going away at the pace that this is happening, we have to be doing something about it.’’

The plight of birds took on a new meaning for Fitzpatrick when his granddaughter was born not long ago. He started thinking about how her lifespan lined up with the pace of change the birds are signaling.

“This was a profound realization to me,’’ he said. “We’re talking about changes that are going to have impacts in 2030, 2040, 2050 that she will face. What’s this world going to be like? What are the things the birds are telling us about what our grandchildren are going to be facing?’’

This new report on the state of birds is really a warning about the juncture we’ve reached, he said.

“If we are ever going to have the information that has a chance of generating a movement, this seems like the right moment. Let’s try to make that happen,’ he says. “This isn’t only a bird crisis. This is a crisis that’s facing everyone, and birds are just the messenger.’’

This post is part of a series delving into the Science research and its impacts. Click here to view an initial report on the findings, and here for a piece about how to make sense of the enormous dimensions of lost birds. Click here for a piece on 10 things you can do around the house to help save birds.