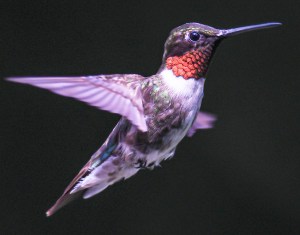 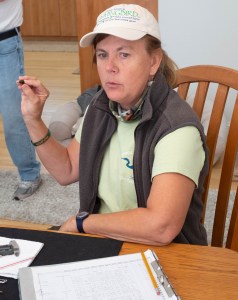 Cornell Lab’s migration map shows the usual range of the Ruby-throated Hummingbird. The red is the breeding territory and the blue is the spring migration target.

But the first birds who skipped the migration may have done so by accident. Researchers say that young birds, often on their first migrations, tend to stray far and wide, like teenagers of any species. As they’ve found the climate mild enough for stay through the year, more and more of them join the migration revolt.

What happens next is the interesting part.

Birds that stop short of the tropics will return in the spring to their breeding grounds in the far north. Their new migration routes become part of the genetic instruction they pass along to their offspring. If they happen to mate with another bird that winters in the U.S, the genetics will be straight-forward.

But if they mate with a migrator, the genetics may include mixed messages. “It all depends on who they mate with,’’ said Weidensaul.

Either way, the migration instincts can be muddled and possibly give the birds more leeway, researchers say. As the birds experiment with where they go and what routes they take, they are beginning to form a new routine. As a rule these kinds of  tiny adjustments are the fabric of evolution and are spread over thousands and even millions of years as birds jostle for survival.

The challenge of modern-day changes is they are coming so fast. A major report on migration released two weeks ago by the Cornell Lab of Ornithology and two research universities found evidence that birds have sped up their spring migration cycle over the past 20 years alone by as much as a month to adapt to flowering and insect schedules.

The research also suggests that despite their early spring arrival, some species are nevertheless falling out of sync with the blossoming of plants and insects . That could mean they don’t have the food and nourishment they need to start the breeding season, and eventually determine which birds survive and which don’t.

A female Ruby-throated sips the nectar on a flower on North Carolina’s Outer Banks.

Our Facebook followers, from west and east, who shared their experiences are seeing all kinds of unexpected behaviors on the part of their local hummingbirds.

Lewis Miller, who lives in north central Illinois, said Ruby-throated Hummingbirds have been staying into mid-October. “Very unusual for them to be here this late,’’ he said.

Many folks say they keep their feeders out longer to help the hummingbirds. It’s a big part of the relationship between bird lovers and the hummingbird. Some of our Facebook followers go to great lengths on this front. Judy Starks Gargano, who lives in Southwest Michigan, makes her own solution for the 12 feeders she keeps out at the busiest parts of her season.

“By the middle of August, I’m going through a couple of gallons a week.’’

Several people asked whether they should keep their feeders out in the winter, and whether that might tempt birds that should be going south to stay longer than they should.

Brooke Bateman, a climate scientist with the National Audubon Society, said people should use common sense about how long the feed hummingbirds.

In warmer Southern states where the birds are known to be overwintering, it’s fine to keep the feeders out, she said. The western species of hummingbirds can withstand the winter weather, while the dominant eastern species, the Ruby-throated Hummingbird, can only take shorter periods of freezing temperatures.