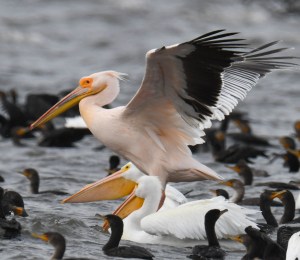 The arrival of vagrant species excites birders like little else, and it also opens a window on the complexities of migration. Bird migrations are guided by weather, food and genes. As for genetics, sometimes instincts can be muddled or even in conflict if a bird’s parents’ migration histories differ.

“Sometimes it could be programming if you will, variation in birds’ orientation and navigation tools,’’ Farnsworth said. Other times, the weather can play a role. “For example seabirds can become (entrapped) in the circulation of hurricanes and transported far away,’’ Farnsworth explained.

Few birds end up as far off course as this Great White Pelican seems to be. The species comes from the coast of Africa, Southern Europe and India. So this one would have flown somewhere between 4,000 and 8,000 miles to reach Florida if it came under its own power. 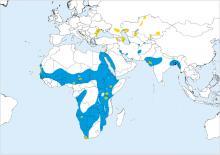 Great White Pelican range map, from Birds of the World

In fact, the Great White Pelican is known for its ability to fly for days without stopping, even across massive bodies of water. Its wingspan can reach 12 feet, making this one of the largest birds on Earth with a powerful form designed for distance.

It’s hard to answer these questions with certainty. The arrival of a single non-native bird isn’t likely to upset things in Florida. Cornell’s Farnsworth said the fact that it didn’t appear to be banded meant it was likely a wild bird, not a captive. As to how long it will stay, the best answer will come in time from the swarm of birders following the pelican.

Here’s a video of the Great White Pelican on the Merritt Island refuge last week:

A Great White Pelican has visited Florida once before in recent years. In 2016, one showed up in the Ding Darling National Wildlife Refuge on the Gulf Coast’s Sanibel Island, and another – perhaps the same bird — was spotted near there again the following year.

As it does with significant vagrants, the Florida Ornithological Society conducted an investigation of those cases, studying photos, confirming the bird’s identification, even checking with zoos and aviaries to see if any had gone missing.

At first, the society figured Ding Darling’s bird may well have flown from across the globe. “Given the migratory behavior, the history of vagrancy, the lack of any signs of captivity, and pelicans’ great ability to fly long distances, the Committee felt that a wild origin was not out of the question,’’ the society wrote in its report.

Then after the second sighting, it backed off that conclusion a little. “We felt the bird from Sanibel is just as likely an escape from captivity as a wild vagrant from natural populations,’’ it added. 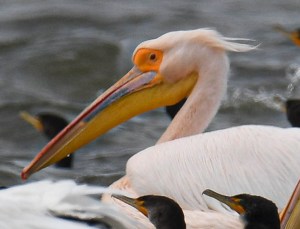 Whatever the true story, both the earlier visit and the current one accomplished something in themselves. They brought a flurry of attention to the mysteries of migration and the impacts of a changing world on birds.

The hundreds of comments from Flying Lessons’ followers showed the excitement a single fascinating bird can engender.

“This is so cool,’’ said Gwen Rhodes.

Added Andrew Filtz, “I guess the old school saying can be put here for the pelicans. You’ve come a long way, baby.’’ 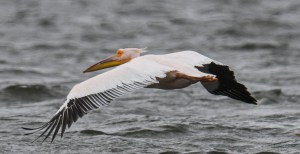 After a short stay within view of our group of birders, the pelican took flight and disappeared in the middle of the Indian River.