We’ve been watching the birds return to their summer homes these past few weeks.  One morning, an explosion of bright orange hit the living room window as a pair of claws scrabbled at the iron mullions, trying to gain a foothold. 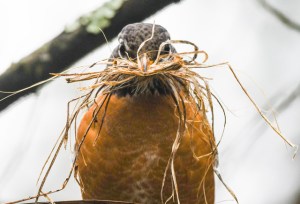 It was a Baltimore Oriole, come back to the place that had offered free orange halves the year before.  I quickly nailed fresh oranges to the porch post and soon both a male and female (not to mention a sapsucker and red squirrel) were pecking at the fruit.

The orioles are nesting high up in the trees facing the house now.  An American Robin has built her nest in the eaves of our barn.  It’s a large, somewhat messy affair with straw, which I use to cover the vegetable beds in the winter, spilling down through the rafters.

A clan of quarrelsome Blue Jays has commandeered the towering hemlocks by the garage where, last year, the hummingbirds nested.  I’m not sure where they’ve moved to now; they seem to be coming from all directions as they swoop down to hover at the feeders. 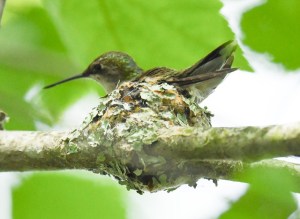 The other evening at dusk I was standing in the dining room, looking out at the back garden, when a hummingbird stopped in mid-flight, wings beating 80 times a second, and stared back at me for what seemed like a long time.  Who are you?  it seemed to be asking.  What are you doing inside when there are so many wonderful places out here to nest? 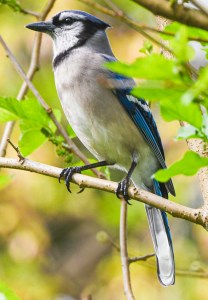 Part of the joy of bird-watching is seeing them in flight.  The hawk circling high above a field. An owl flapping silently into the woods at dusk. A crow pumping through the air on some purposeful errand.

Recently, I came upon a poem that I think captures the magic of birds in motion — far better than ordinary prose.  It’s written by the American poet Li-Young Lee who was born in Djakarta, Indonesia, to parents who were political exiles from China.  His father had been the personal physician to Mao Zedong.

I think it’s Lee’s innate understanding of these different cultures and languages that gives his poetry such spiritual grace and resonance.

Look at the birds. Even flying
is born

out of nothing. The first sky
is inside you, open

at either end of day.
The work of wings
was always freedom, fastening
one heart to every falling thing.

Li-Young Lee began writing as a student at the University of Pittsburgh.  He is the author of five books of poetry and a memoir and has been recipient of almost all the major poetry awards.

his post is republished from Liza Gyllenhaal’s “Writer in the Garden,” an exquisite website devoted to the intersection of gardening, nature and poetry. Liza, who is Anders’ sister, is a novelist and avid gardener, who writes about life and nature in the Berkshires in Western Massachusetts. We love it when she takes up the topic of birds, or goes close enough that we can publish her pieces on Flying Lessons.