How is a warbler like an apple-glazed donut? Both are impossible to resist.

There’s a spot on the boardwalk next to the Town Hall in Duck, N.C., that everyone knows is famous for doughnuts. This morning dozens of customers wait in line for up to half an hour, and the fall menu boasts flavors like Pumpkin Streusel, Pumpkin Roll and Maple Bacon. 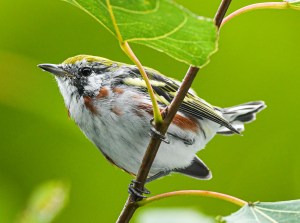 A.Chestnut-sided Warbler, one of the many warblers passing through the Duck boardwalk region. Photos by Anders Gyllenhaal.

Only a few yards away there’s another place that should be famous, but very few people have ever heard of it. Here, atop the live oaks and the willows is a different fall menu — the Chestnut-sided, Black-throated Green, Black-and-White, Prairie, Palm, Black-throated Blue and Northern Parula warblers.

Doughnuts are my weakness — oh the lengths I will go and the calories I’m willing to trade. Today at the donut shop there’s a deliciously wicked autumn confection called Caramel Apple Pie (apple glaze with salted caramel drizzle), and my stomach is growling.

These flavors won’t be around for long, but neither will the fall warblers – hands down my favorite birds.

Many of them have flown in from their nesting grounds in Canada and the Northeast, touching down on the Outer Banks only long enough to fatten up for the next leg of a journey to the Gulf of Mexico, then across the waves to their wintering grounds in Latin America. According to eBird, there’s a darn good chance of spotting 15 types of warblers and a “reasonable” chance of seeing 11 others along the boardwalk today between the Methodist Chapel and the Duck Donuts shop. That’s almost a third of all the warblers found in the U.S.

Here’s a video of a Black-throated Green Warbler, frantically collecting fuel for its migration:

Here are a half dozen of the warblers we visited with — instead of eating donuts — at Duck: 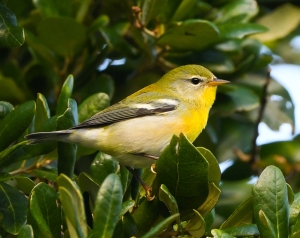 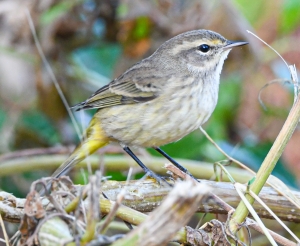 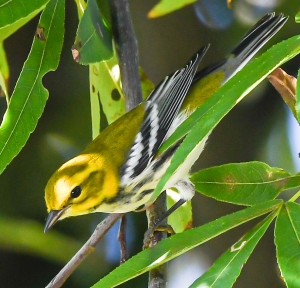 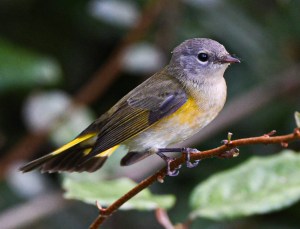 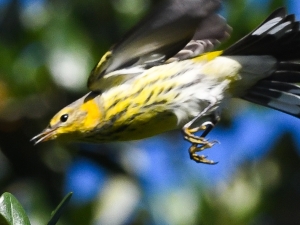 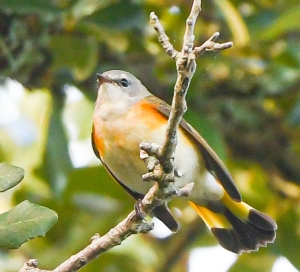 If you’re new to birding, trust me, this is an astounding array of warblers — colorful fists of fluff that flit from branch to branch and tree to tree faster than you can lick those doughnut crumbs from around your mouth. By 8 a.m. cars with plates from several states are parking beside the town hall, cameras and tripods are coming out of the back seat and binoculars are strapped into place. Birding guides for hire are briefing their customers, and the locals are comparing notes on who saw which birds the day before. 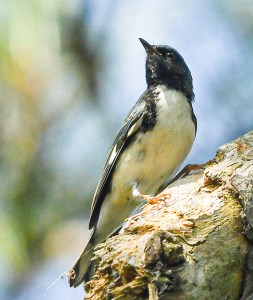 It’s business as usual in this neck of the birding world, a tight-knit group that’s among the most dedicated and skillful birders in North Carolina. But if you didn’t know what these folks tend to look like (khaki clothes, hiking boots, dull-colored caps, telephoto lenses and/or powerful binoculars), if you hadn’t been checking eBird and therefore didn’t know that this is a prime warbler hotspot and probably the best viewing day of the season, the whole phenomenon could easily pass you by.

Today, however, we are an easy bunch to spot – half a dozen of us peering straight up, barrels to eyes, frequently gasping, trying not to point (it scares the birds). And what a show: feathers of greens and blues, glowing yellow throats or maybe an orange racing stripe at the base of the tail. Meanwhile, a steady parade of doughnut patrons passes by, their breed equally obvious thanks to carry-out boxes of the coveted round confections.

“What are you looking at,” they want to know. 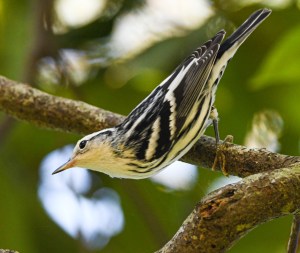 “Little tiny birds way up in the trees,” I respond. “They’re called warblers, and they’re remarkable but hard to see without binoculars.”

Although I’ve made my choice for how to spend the morning with no regrets whatsoever, I can’t help but wonder what it is that’s eluding me:

“So what flavors did you buy?” I ask. “Are they amazing?”