The Florida Scrub-Jays have come to recognize the white Ford pickup that bumps along the sandy roads headed their way. They’ve long since become accustomed to the familiar figure that jumps out of the cab and starts walking along the roadway. The birds are zipping his way at full speed within a minute or two of his arrival.

It’s the monthly census at the Archbold Biological Station– and the jays are more than willing to be counted.

The driver is Reed Bowman, the state’s expert on Scrub-Jays who’s spent 30 years studying these endangered birds in search of a way to help their population rebound. The monthly census gives the birds something they want — peanuts that Bowman scatters along the road to draw the birds. And Bowman gets what he needs: a close look at the birds to make sure they’re all accounted for and healthy. 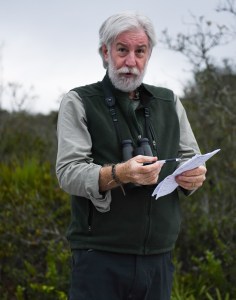 “Here they come,’’ Bowman says, on his second stop of the morning, where the jays were particularly eager to reach him.  They land and wait in the stunted oak undergrowth nearby. Then they plunge forward and go after the treats. Bowman raises his binoculars and quickly spots the colorful bands on their legs that identify every individual bird.

“See that white and green (band), that bird right there?’’ he says. “And there’s red, (and) red. They both have antennas sitting on their back. A little bent up, but not bad.’’ 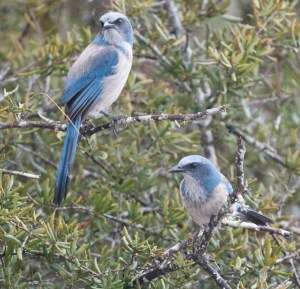 Bird counts everywhere are an important part of tracking the health of species in general, but the regular census at Archbold stands apart. Every month for the past half century, the Archbold bird staff has fanned out across the 8,000 acres dotted with pines, stunted oaks and palmettos to build an unparalleled historic record of the Florida Scrub-Jay population.

About 85 families of jays live here, one of the few areas where they’re stable and even increasing on some tracts. Researchers believe the answer to saving the disappearing species lies in this intense study. It focuses not only on population size, but on their overall health, how the birds live, particularly how they mate, build nests and raise young.

Can Florida and the endangered Scrub-Jays co-exist? 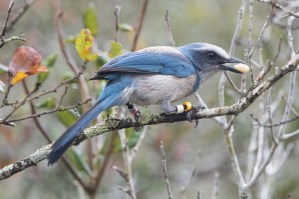 The research depends on keeping constant track of them by laying eyes on every bird at least once a month. Have any young birds left the family circle to breed on their own? Are any “veteran” breeders missing? Have any birds simply disappeared?

This basic information, collected the old-fashioned way, is then fed into computers and tracked to understand the population trends over time. Here’s an earlier post on the radio telemetry system that Archbold is using to track the young jays. 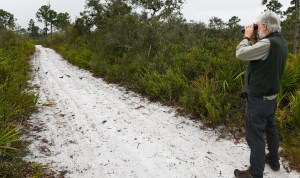 While the jays gather on the road, Bowman checks to make sure they’re all accounted for.

The census has a drudgery, but Bowman says he never gets tired of being among the birds. At times, five or ten of the jays fly in circles around Bowman as he makes his way around the scrub lands.  His morning trek represents decades of research that has led to key insights on what it will take to help turn things around. For starters, the scrub lands must be managed with fire — controlled burns that will help keep the land in its historic ecological condition. This helps ensure young birds have enough fresh territory to start families of heir own.

Researchers at Archbold aren’t just concerned with their own scrub-jays. They hope the research will help guide the entire state to better maintenance plans and careful protections. After all, scrub-jays are the lone species that’s found only in Florida.