Here’s a surprise: Birds watch out for each other, take turns on the hard jobs and use aerodynamics on their way South

The most visible sign of the fall migration has always come with a kind of riddle: Why do birds fly in those big V-shaped formations on their journey south?

When researchers came up with a way to ride along for a portion of the trip, they learned there’s a lot more going on up there than they expected. The maneuvers turned out to be impressive displays of teamwork, aerodynamics and selflessness of the part of birds. Experts say we could learn a thing or two from how they travel.

An earlier Flight Lessons post looked at secrets emerging on flight flocking, in which thousands of birds move together like a cloud. Several readers asked what’s going on with another form of joint flight: the V-formations that larger birds in particular, such as Canadian geese, all varieties of ducks, Ibises, storks and Pelicans, form as they fly. 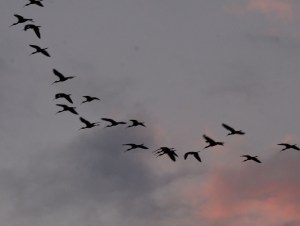 A V-formation of Ibis pass over Myakka River State Park in Southwestern Florida.

The V shapes are a symbol of a migration that otherwise takes place mostly at night or out of our view.  There’s something magical about them, says Bret Tobalske, director of one of the nation’s leading flight labs and associate professor at the University of Montana.

“People from time immemorial have been fascinated by the formations,” he said. “We have looked up for a long time and been just fascinated by how they do this.”

A pair of Brown Pelicans glides over the ocean just offshore.

Researchers assumed these birds were using the drafts of air the same way that jets, cyclists and Nascar drivers get a lift from those ahead of them. But because birds are powered by wings, the currents they create are more complex than, for instance, a jet-powered engine.

“What they do is essentially ride the wave of the bird in front of them,” said Tobalske. “That becomes considerably more complicated since birds are flapping their wings.”

The breakthrough on this came first from England,  where experts with the Royal Veterinary College figured out a way of fitting tiny electronic devices on an endangered species, the Northern Bald Ibis,  as they were making their first migration across central Europe. The young birds, raised in captivity and then released, followed an ultra-light aircraft as they learned to navigate. This enabled the researchers to collect the data on stops and to determine exactly what the birds were doing.

It turned out even these novice flyers instinctively found their places at exactly the right intervals in the V-formation to gain the most lift.  They also needed to adjust their timing whether they were a full- or half-length behind the bird in front of them, since the air currents rose and fell with the flapping.

“This was a quantum step forward in terms of understanding,” said Tobalske, whose laboratory was not involved in the Ibis UK research but like all labs around the world share data and discoveries to piece together an understanding of flight. 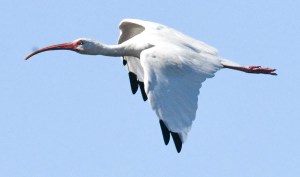 A White Ibis in midflight

Just as surprising has been the way the birds generously alternate turns in the lead spot of the V, where there’s no draft to help them. (One study found that the lift was steadily more powerful as birds moved back in line, until those in the rear expended up to 30 percent less energy.) Another found that some species work under a sort of buddy system: If a bird is injured or exhausted, a fellow bird will drop out and stay with the downed companion until it’s ready to go.

Here’s a video from National Public Radio that explains the V formation and provides a glimpse of the Ibises and the ultra-light craft:

Birds can make flying look easy, but Tobalske said the more you learn, the more impressive these accomplishments appear — particularly the flights of thousands of miles each fall and spring.

“Flying is a great way of getting somewhere quickly,” he said. “The downside is that it takes a great deal of energy.”

The nation’s flight labs are working on all sorts of studies; some are aimed at advancing the understanding of nature, while others are meant to help human endeavors. Birds have inspire and helped explain the mechanics of flight since the Wright brothers lifted off at Kitty Hawk. As supersonic flight has arrived, the lessons from birds have had fewer applications. 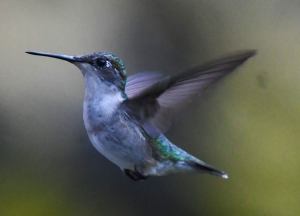 The Ruby-throated Hummingbird can flap its wings 70 times a second.

But that could change as a new era of flight develops around drones, which demand both limits on energy and a different style of flight — not unlike the way Hummingbirds are propelled with wings that flap an astonishing 70 times per second.

This makes flight research valuable on a number of levels. It could lead to breakthroughs in modern flight at the same time as it helps us appreciate the inner workings of nature.

“That’s going to be the key to saving (species),  recognizing the value of how nature works,” said Tobalske, who added that despite the modern day pressures on wildlife, he is encouraged as he goes about the research. “I’m left with a relatively hopeful perspective,” he said.

And finally, if you’d like to go deep on the V-formation dynamics, here’s a long, somewhat dry video with animation that will answer just about every question.

Thank you Beverley.
Your flying lesson has given me a comprehensive answer to the distinctive flying pattern. Next time I will look at the flying geese with even more admiration.
( I also enjoyed the banjo accompaniment to the video; and now, forever more when I see the geese, I will stick in a banjo.)
Laurie Landy

Thanks so much for your note. Much appreciated!