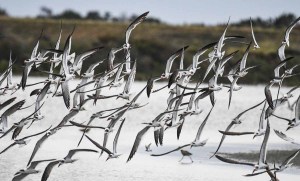 That same appeal has captured the hearts of researchers around the world. One of them, University of North Carolina’s Tyson Hedrick, said it was the sheer beauty of that synchronized motion that drew him to the field 20 years ago.  “It’s an amazing, beautiful, natural phenomenon,” said Hedrick, an associate professor of biology who runs a lab where some of the most intriguing research is taking place.

For a reminder of just how impressive these sights can be, take a look at this video  of Starlings moving in a giant cloud, or this one of Red Knots moving in simultaneous motion, from the website of the conservation group RSPB. Both videos are also posted below on the continuation of this piece.

From the ground these massive maneuvers are not easy to make sense of with the naked eye. “It’s hard to look at this without a big 3-D reconstruction and see what’s going on,” Hedrick said. “Why are birds flocking in the first place? What are the pros and cons of what they’re doing?”

Researchers first began to make progress on such questions with the computer advances in the 1980s. In Rome, where flocking Starlings famously perform acrobatics for the tourists, a Pan -European study for the first time was able to photograph and analyze their flight dynamics. From there, projects looked at shorebirds, pigeons and Dunlins.

They found that the birds have neither telepathy nor consistent leaders. Instead, they watch a handful of nearby flyers in order to quickly respond to changes in course. These moves ripple through the flocks to guide direction of these avian clouds. Though the flocks look impossibly crowded to us, the birds keep a clear path ahead of them to make their moves.

A flock of geese over Lake Mattamuskeet in North Carolina.

There’s some evidence that the birds may be able to fly faster in flocks, whether in giant clouds or in the V-formations common to ducks. The gatherings also protect them from attack by giving them strength in numbers and enabling them to keep a collective lookout for hawks and other predators.

The research has found that the dynamics of flocking vary among species, so there’s not just one way of pulling off the maneuvers. “It all looks like the same behavior to us,” Hedrick said. “But we’re just humans on the ground, and we may not appreciate the differences.”

One of Hedrick’s labs projects focused cameras on Chimney Swifts, which gather in Raleigh, N.C., by the hundreds at night in a giant swirl as they prepare to roost in chimneys. While flocking is a spontaneous event for most species, the Swifts go about their nightly routine like clockwork, which makes it possible to be prepared with cameras and software.

Above is an enhanced computer reconstruction of the gathering, worthy of space at a modern art museum. Unlike the more orderly moves of Starlings, those of Swifts turned out to be a somewhat chaotic event that nonetheless gets them all into the chimney without a scratch — or much of one.

The research isn’t just for the love of nature. Just as bird flight dynamics helped shape aeronautics from the Wright brothers forward, the flight flock discoveries have lots of potential applications. “The Department of Defense and many other agencies would love to be able to get their robotics to behave like that,” Hedrick said. 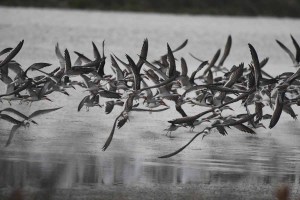 A flock of Skimmers just as they gather to flock.

The way flocking birds are guided by those around them might apply to human behavior as well. One example, say the European researchers studying Starlings, is how voters are influenced by those closest to them. They also wonder if flocking dynamics might help determine decisions such as where best to place a bank’s branches.

These ideas — and flocking research in general — are still at the earliest stages. Hedrick said that for all the progress they’ve been making, there are more questions than answers. The research is complex and cumbersome to set up and deliver on.

“It’s going to take quite a bit of work, though we’re making headway,” he said. “The research is moving fast. I don’t know where it’s going to end. Sometimes you think you get to an answer and all you get is another question.”

Of course, if you’re doing it surrounded by one of nature’s wonders, it’s not a bad place to spend your time — as this last video so wonderfully illustrates: