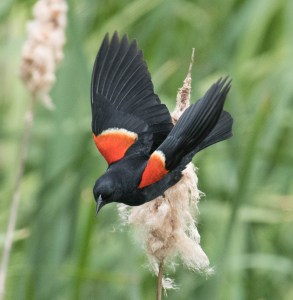 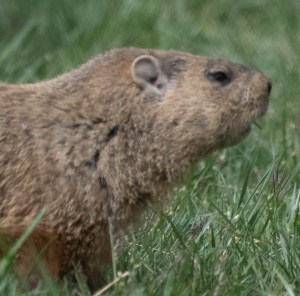 The Punxsutawney Groundhog Club has built a nice tradition on whether the groundhog can see its shadow or not (no shadow means spring’s on its way; seeing its shadow means a delayed spring). But it turns out that when they compare Phil’s predictions with the actual weather, he’s usually wrong. Early this morning, there was no shadow — hence spring may be on its way.

The Blackbird, on the other hand, bases its arrival on a combination of weather, insects and instinct. So watch for the first arrivals, and let’s see which of our wildlife barometers turns out to be right.

Here’s an animated map from the Cornell Lab of Ornithology that shows the widespread presence of Red-winged Blackbirds and how they move in the spring and fall. Click the arrow to launch the navigation: 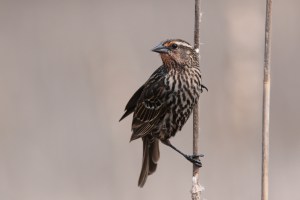 The Red-winged Blackbird is notably polygamous. The male takes up with as many as a dozen females in a season, and the female in turn will mate with more than one suitor.

The birds are so plentiful in many parts of the country — and their feeding preferences are broad enough  — that they often do significant damage to crops. Understandably this has led to constant friction with farmers.

For now, though, we’ll put all that aside in celebrating this early bird. Welcome back – and may this worthy bird bring spring along with it. 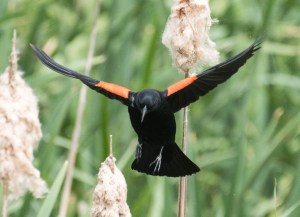 As a gardener, my sworn enemy is the groundhog, so I’m delighted to learn the Red-winged Blackbird is a more reliable — and far better-looking — harbinger of Spring. Really love these animated maps!