How he stole my heart: Cocky, reckless and drunk with love

Love can be dangerous. We know it. And yet, there are times when this most elemental of emotions pushes you beyond all reason. 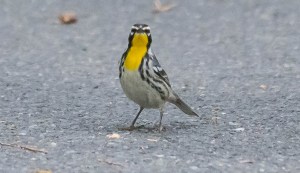 Why else would an otherwise elusive, tiny yellow bird end up walking down the middle of the road in broad daylight? It was a gorgeous spring day, and this Yellow-throated Warbler was drunk in love.

Typically Yellow-throated Warblers are so difficult to find that they’ve hardly been studied. They spend most of their lives hidden, conducting all of their daily activities behind the leaves of trees some 200 feet tall.

And yet…there he was, hopping down the road in mid-May at the Pokomoke River State Park on Maryland’s Eastern Shore.

Anders and I had just finished a long birding hike through the forest, heading back to build a fire and call it a day. Out of the corner of my eye there was a suddenly a splash of lemony yellow where it wasn’t supposed to be.

A jolt of something akin to electricity shot down the backs of my legs as I realized what was happening. I dug my fingernails into my husband’s arm and pointed, resisting the urge to jump up and down.

Then all I could do was stand by and watch, holding my breath to see if Anders could move fast enough to get the photo.

In the past six years, Anders has taken hundreds of thousands of pictures of birds. Of those, he’s kept a library of roughly 30,000 that I think are absolutely gorgeous. But one that I treasure most is this photo of the Yellow-throated Warbler walking down the road on a spring afternoon. 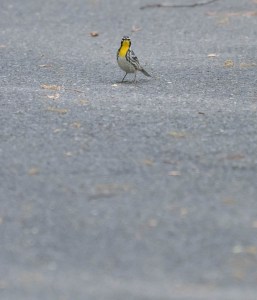 A male Yellow-throated Warbler walking down the road at Pokomoke State Park.

It makes me giddy every time I see it. There’s such an attitude in his stance, a cocky backward tilt of the head. It’s like, “Yeah, you caught me. I know this isn’t smart. But I’ve gotta find her, and time is running out. Now get the heck out of my way.”

If you’ve spent any time on our website, you already know that Anders and I think a lot about what we’re learning from the birds. We wonder why it is that birds have so captivated us. For me, a good portion of it can be summed up in this chance encounter with a warbler.

My passion for birding is largely private, playing out in the continual hope of experiencing something so profound that I’ll remember what it is to abandon all reason, too. It really can feel like those first throes of true love, an intensity propelling you toward that one perfect mate, come what may.

And if it’s going to happen, chances are it’ll be in the next few weeks: Spring migration, when millions of songbirds, having fought their way across the Gulf of Mexico, fan out, head north to their breeding grounds, and start to sing. 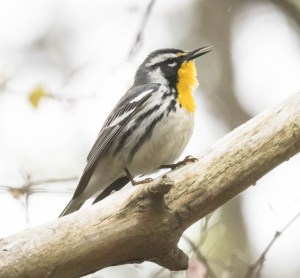 A Yellow-throated Warbler sings in springtime.

According to birding experts, the Yellow-throated will one of the first warblers to get going. Unlike many birds, the Yellow-throated knows only one song – but it is loud with a wild, ringing quality. (Here’s a link if you’d like to hear it.) Until he finds a mate, he will sing incessantly from dawn to dusk.

Like thousands of dedicated birders in the United States, (by some estimates there are a million of us), the spring migration is a slice of heaven. Now it’s here. We’ve gotta go find ‘em, and time is running out.

Now if you don’t mind, get the heck out of my way.

Here’s a gallery of birds — large and small — getting together during the spring bird romance season: 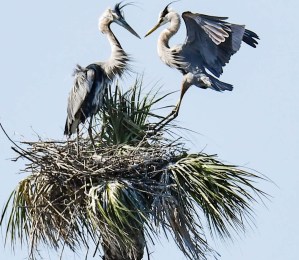 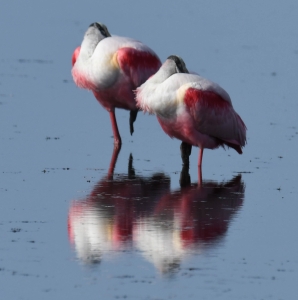 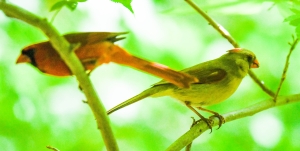 Cardinals, with the female on the right

A pair of Bluebirds surrounded by buds 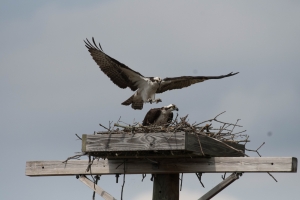 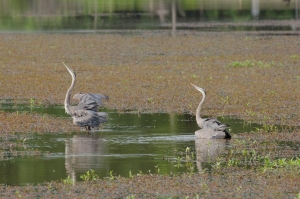 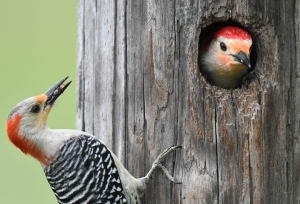 A Little More Freedom: Letting go of your worries on the birding trail

What a wonderful post. You have captured the joy of birdwatching and of love at the same time.