When we post photos on Facebook, as we try to do every couple of days, we learn all kinds of things from the thousands of readers following our Flying Lessons page. Some tell birding stories. Others share photos. Together, they let us know which species they like best.

Raptors are the most popular. A close second are the chicks and fledglings that are steadily more visible this time of year. 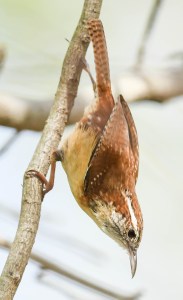 Our followers are fascinated by exotic birds, like the Roseate Spoonbill and the Magnificent Frigatebird. And yet, in something of a surprise, the greatest outpouring of comments often come with the most common bird photos, from Bluebirds to Cardinals, Sparrows to Chickadees.

The other day, we shared a shot of a Carolina Wren, hanging upside-down as they often do. These shy but abundant birds can be found in much of the country every summer, at feeders, in the woods and along trails. And clearly, they are a favorite, like old friends bringing fond memories.

Within an hour, our Flying Lessons Facebook page was peppered with comments about how readers love these Wrens, with their long, curved beaks and tireless singing.

“This beautiful bird has the loudest voice,’’ said Jo Dewar. “Fun to hear and watch,’’ said Rea Pitsnogle. Wrote Elizabeth Strickland: “Love watching Wrens get food for their babies and themselves.’’

By the end of the day, the page had collected a string of stories about delightful and unusual Wren encounters. 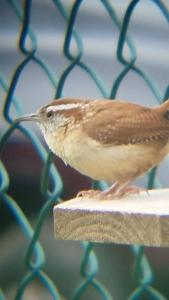 Maydra Johnson told how a family of Wrens built its nest in a hanging plant outside her home. “After the babies flew, I moved it. They were back today, looking in the window,’’ she said. “I put the plant back.’’

Gertie Gertrude, one of our most active followers, shared a photo of the Wren that visits her home in Silver Run, Maryland. Concerned that the Grackles and Blackbirds were taking all the food, she put up chicken wire so that only smaller birds, such as the Wrens, can slip through.

“They actually come to the window when the feeder is empty,’’ she said, adding that she has created a healthy mix of meals they seem to like. “The Carolina Wrens and Goldfinches are my two favorites,’’ she said.

The most unusual story came from Serita Camp of Suffolk, Virginia, where a one-legged Carolina Wren appeared last year, set up a nest and raised its chicks outside her home. 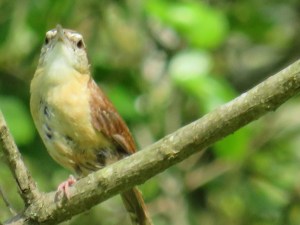 The Carolina Wren that’s taken up residence at Serita Camp’s house, with its lone leg visible on the branch.

Serita built a tiny table to make it easier for the hobbled bird to feed. In return, the Wren started leaving dead crickets on her porch, apparently to show its appreciation. The same Wren, not hard to identify, returned this year for another season. 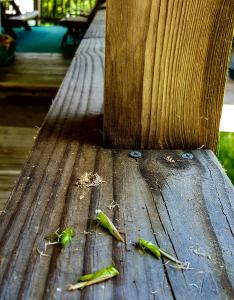 The crickets that Serita Camp’s one-legged Wren left for her as gifts.

“That was super cool! It is amazing to watch this one-legged Wren and her handicap and getting around great,’’ she wrote.

Facebook has lost some of its standing in the past year in the wake of a series of blunders. The Federal Trade Commission just fined Facebook a record $5 billion for mishandling personal information of its users. Congress this month is considering whether the big tech companies should be regulated or even broken up, and the U.S. Justice Department is investigating options.

I worked as a newspaper editor all through the rise of digital delivery, so it was hard not to view Facebook through the lens of its cavalier treatment of local news.

But I’ve had to adjust my stance in the past year. There’s no better venue than Facebook for bringing together birders to share photos, stories, advice and guidance. It’s hard to envision how such an exchange would otherwise exist on such a scale.

As we approach the one-year anniversary of launching our FlyingLessons.us website and Facebook page, nearly 3,000 followers have signed up for updates and posts. In turn, thousands of readers find their way to our website each month. 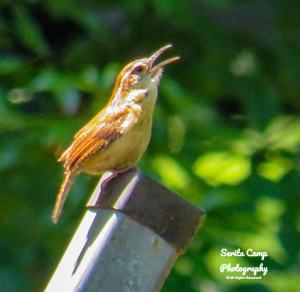 One more shot of Serita Camp’s Wren, singing at the top of its lungs and looking like every other bird.

We’ve loved writing about birds and building photo galleries, pages of birding tips, and occasional videos. And we particularly appreciate it when readers add their personal experiences to the topic, whether it’s a quick comment or a full-fledged story of the crickets your favorite bird leaves behind.

We hope you’ll keep them both coming.