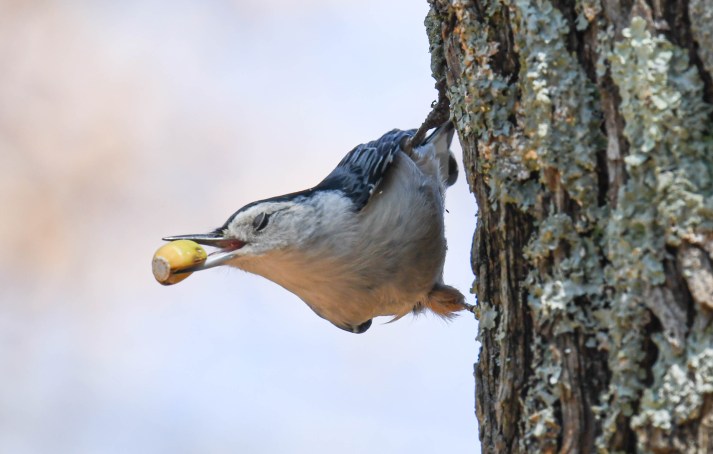 Last in a series

If it’s a crisp fall morning, with the sun highlighting the gold and orange of the still-moist leaves, it’s possible that luck could bring you a visit from a nuthatch. And if you get that chance and if you have the time, you’ll want to sit quietly and pay close attention. 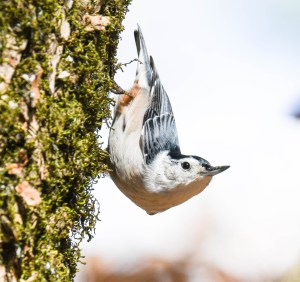 My nuthatch was a White-breasted with a black-and-blue back and an evocative black stripe on its head. He seemed to say watch me. Not only am I good-looking, but I’m smart and industrious, too.

Putting words into the mouth of a bird may be a silly habit, but I can’t seem to help myself. This bird spoke volumes to me.

If I had my way, we’d just give everybody in Congress a pair of binoculars and put them in the woods.

As I sat on a picnic table a couple of weeks ago in a campground near Nashville, I thought the nuthatch was doing his usual thing — creeping up and down the trunk of a tree, probing the bark for something to eat. Then he started hammering away as loudly as a woodpecker.

Strange. I’ve seen these birds crack nuts open with their beaks, (thus the name “nut hatch”), but I’d never seen one imitate a woodpecker – or a squirrel for that matter. Suddenly I realized the bird was boring holes in the tree to hide some of his nuts.

Here’s a gallery of our White-breasted Nuthatch, ignoring gravity, climbing its tree, hiding food and preparing for the winter: 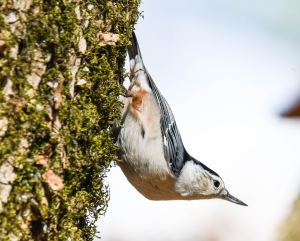 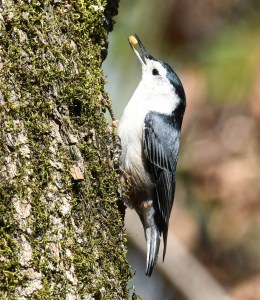 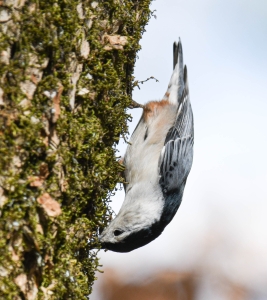 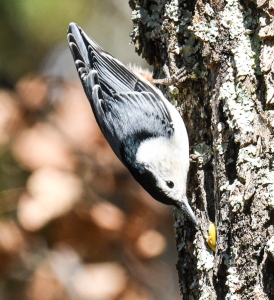 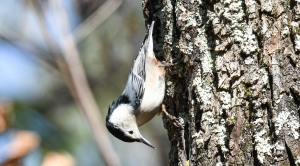 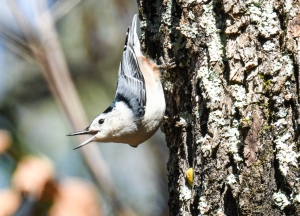 Later, I consulted Cornell Lab of Ornithology’s Birds of North America website, my favorite source for scientific bird trivia. Researchers say nuthatches routinely store nuts and seeds for the winter, with the male bird claiming the tree trunk and the female hiding her’s higher in the branches. They work better in pairs – the female will slack off if her mate isn’t around. Conversely, a male doesn’t work as hard without the female. 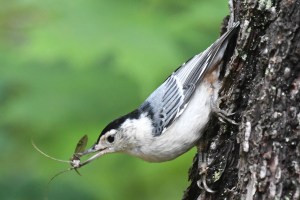 Nuthatches eat mostly insects in the spring and summer along with some moss, various nuts and seeds. They don’t migrate, so in the fall they hide seeds and gorge to put on a protective layer of fat. Come winter, the proportion of seeds in their diet goes up by 20 percent when insects aren’t so available.

This whole display was entertaining, but it also got me to thinking about what, in particular, I am learning from the birds – the theme of Flying Lessons. We’ve been completely focused in the past few weeks on the overall plight of birds, and 3 billion drop in bird population, documented in the consortium report in the journal Science with its powerful call to action. (See the end of this post for links to the other stories in this series.)

With Flying Lessons marking its one-year anniversary this month, I’ve also been thinking about all of the small things, the personal things, that I’ve learned from birds in the past year. We certainly hope a sudden, shocking scientific jolt will put pressure on policymakers to take significant steps to save the birds.

But if I had my way, we’d just give everybody in Congress a pair of binoculars and put them in the woods. 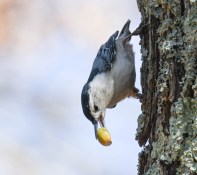 When you really observe birds up close, when you watch a pair of tiny nuthatches getting ready for winter or see a flock of waxwings making a pit stop to gobble the berries off a tree on their way to Costa Rica, that’s when you fall in love with birds.

When it gets truly personal, when the nuthatches or waxwings propel you to think about your own relationship to food, when they make you remember how your grandmother used to freeze corn and can tomatoes to get through the winter, well, it’s potent stuff. At least it is for me.

So my hope is that the threat of not being able to watch the birds will entice more people to just stop and take a really long look. Careful though. There’s a good chance you might learn more than you really want to know. Or, you could fall in love. 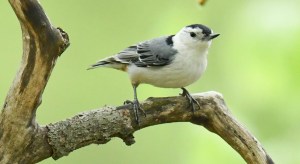 Probing a hummingbird mystery — one band at a time

Love this story, especially the little facts about how the male and female need the other one around to stay motivated. I also wonder why she gets the higher part of the tree and he gets the lower half. I am already sad thinking about hearing less birds generally as we head into winter in NYC. Thanks Flying Lessons and congratulations ahead of time on your anniversary.