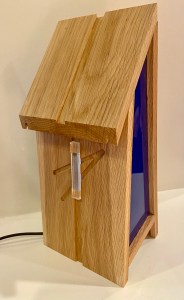 …and for now a list of choices for testers to mark to help sharpen the identification system.

When the beta version of the Haikubox records a bird, it posts a small box that tells you how often it’s been detected, a link to the recording….

The Haikubox is built in a foot-tall, white-oak casing that looks more like a piece of art than a scientific tool. Inside are the processor, a microphone and an antenna that connects to your home wireless system. That enables your box to hook into the enormous library cloud of bird songs that enables the rapid-fire identifications that makes this a wonder. Here’s our introductory post on the project from last year.

What’s most interesting, of course, is what the Haikubox is telling us about our own yard in real time. The findings are reaching our computer and smartphone in a steady stream, especially early and late in the day when birds are most active. We can watch the IDs pop up on the screen and listen to the actual recordings. It also adds spice to bird-watching at home because if there’s a bird the Haikubox hears that we want to see, we can grab our binoculars and go look for it.

The Haikubox shows you the birds that are singing at that moment as well as a census of your bird population over time.

The Haikubox is the creation of David Mann and Amy Donner, a husband-and-wife team with a small company called Loggerhead Instruments in Sarasota, Fla. They are working with the Cornell Lab of Ornithology, which has led the way on technology to identify birdsong and other sound experiments.

Future Flying Lessons posts will delve into the fascinating scientific anatomy of the Haikubox, the challenges of sorting birdsongs from the neighborhood cacophony  and how the development is going.

For now, we just wanted to give you a glimpse of a future that’s just around the corner.

Gucci discovers birding, and it’s never been more fashionable. You don’t want to miss this!