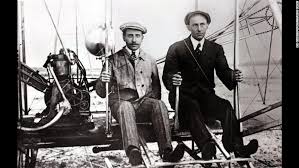 Today is the anniversary of the Wright brothers flight on the Outer Banks of North Carolina, where we visited the newly renovated memorial a month ago. What a Flying Lesson it was.

We set off from our campground on a near-perfect fall morning toward Kitty Hawk where the Memorial has stood for over a century. A chunk of granite at top of Kill Devil Hill marks the marvelous December day that – after years of painstaking and obsessive efforts — Wilbur and Orville proved that people could fly. 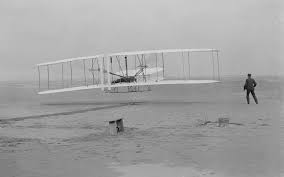 The original photograph taken the day the Wright brothers proved they could fly.

Naturally birds were part of the brothers’ inspiration, and birds became their instructors as well. The brothers watched birds soaring directly into the wind and noticed that the air flowing over the curved surface of their wings created lift. Birds also change the shape of their wings to turn and maneuver, and the Wrights believed they could find a way to emulate this to block their plane’s tendency to roll in flight. So they warped, or twisted the shape of a portion of the wing. It’s the birds’ twist in their wings that helps them be more agile and aerodynamic.

The details of the quest to fly captivated Anders and me when we read David McCullough’s book “The Wright Brothers.” We’re basically obsessed with birds ourselves at this point, and so for me a trip to the place where humans took flight felt like a necessary pilgrimage.

If you’re a native North Carolinian, you can’t help but take pride in the fact that our state is “First in Flight.” Like many 7th graders studying North Carolina history in 1970, I visited the Wright Brothers Memorial on a classroom field trip. Fast forward to 2018, and fortunately for me, the Visitor’s Center had just re-opened after a two-year renovation costing nearly $7.5 million. It houses an exact replica of the famous flying machine and a carefully preserved strip of cloth from the wing of the original plane.

The actual Wright Brothers airplane, called The Flyer, is on permanent display in the Air and Space Museum in Washington, D.C. I live in the city and have seen the airplane many times. So for me, the Visitor’s Center, though superb,  wasn’t the draw.

My personal moment – the unexpected “Flying Lesson” – happened while staring at the enormous sand dune where Orville Wright made history on Dec. 17, 1903, with the first human-controlled, engine-powered flight.

The winds typically howl in Kitty Hawk, and this day was no exception. The strong wind, coupled with the hill and the expanse of forgiving sand, is why the Wright brothers chose this place.

Whoopee I’m about to climb to the summit, stand on the spot, and await a sort of self-defining moment I figure is bound to take place. I hop out of our truck, get smacked in the ear by one frigid gust and head right back in for a sweater and my coat.

Even still I couldn’t summon the will to walk upward. So I stood covering my ears and reading the plaque at the bottom of the hill. And here’s what it said:

For every flight trial they made, the brothers and their small crew hauled that 700-pound plane up the 90-foot hill with their bare hands. And every footfall upward was met by a half-step slide backwards in the unfortified sand.

Before they finally got what they wanted, Wilbur and Orville climbed that hill more than 1,000 times. But I couldn’t bear to climb it once.

By the end of this spectacular October day, after pondering all that was required by two men to make flight a reality, I decided not to think of my own my failure to climb as a self-defining moment after all. It would just be depressing, and who needs that?

Rather I will consider my sojourn to Kitty Hawk as yet another lesson in what can be accomplished by watching the birds and continuing to simply put one foot in front of the other.

Bird of the Week: Can the Eagle’s revival be repeated?

Year of the Bird: Can this sweeping campaign curb rising threats to birds?

Beautiful post, Bev. I, too, loved “The Wright Brothers” and was deeply moved by how hard they had to work on the ground to finally lift off.

Thanks so much for this note. A beautiful flight, indeed.

Just now happened to be reading an article online about local wildlife biologist, Laurie Goodrich, and her work at Hawk Mountain. Scroll down about 2/3 of the way to see slow-motion video of a bald eagle in flight, adjusting wing and tail feathers just as the Wright Brothers tried to mimic with their flying machine.